Fledge watch 2020: Peregrine falcons preparing for first flight at U of A 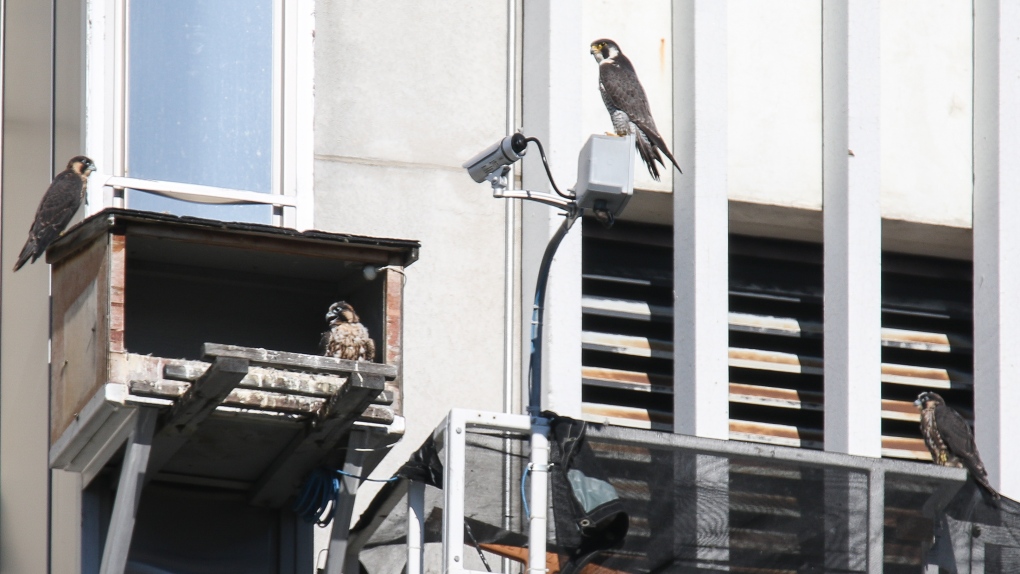 Two males and a female were born at the nest atop the Clinical Sciences Building in June. As of July 20, the males had gone on several flights more than their sister, but bird watchers were expecting her to take-off soon, too. (Credit: Janice Hurlburt)

EDMONTON -- Baby peregrine falcons atop the Clinical Sciences Building at the University of Alberta are preparing for their first flight.

Notices have been posted throughout the area warning the public the fledglings may become stranded on the ground near the university hospital.

"Anyone who encounters a chick on ground level is asked to please avoid making contact with it," a poster reads, providing an Alberta Fish and Wildlife contact.

A program facilitator, Lisa Hopkin, said volunteers are keepin an eye on that nest, and several others throughout the city, from 6 a.m. to 10 p.m. daily to help ensure take-off goes smoothly.

At the nest at the Clinical Sciences Building, two males and one female were born 42 days ago.

The males have already gone on several flights.

“The boys flew off exactly right on time. For females it is 41 to 42 days before they go, so we’re right on time for the female, too," Hopkin said, explaining females are usually heavier and clumsier.

On a shift that morning, the avid birder said the female wasn't fed once by her parents.

“They do that on purpose so she gets so hungry so she comes out.”

The most difficult part of take-off from the Clinical Sciences Building is the Mazankowski Alberta Heart Institute next door, whose windows at certain times of day look exactly like the sky.

The boys, Hopkin told CTV News Edmonton, have flown into the heart institute a few times, but parents Raddison and Chase have been trying to teach them to fly left towards College Plaza first.

"The boys have done beautifully. They’ve done perfectly what mom and dad showed them," she said.

Peregrine falcons, capable of reaching 360 km/h while swooping downward while on a hunt, are the world's fastest animals.

However, Alberta's population of hypersonic predators was nearly wiped out due to the widespread use of the pesticide DDT, which makes eggshells thinner and more breakable. According to government data, there were only three known breeding pairs in the province by 1970.

In 2009, Alberta launched a recovery plan. At last estimate, the regional peregrine falcon population was thought to be between 65 and 75 pairs.

Several nest boxes throughout the city are maintained by the Alberta Conservation Association; some of the nests' goings-on are livestreamed in the early summer.

This year, another two of four fledglings at the Bell Tower were moved to the Pembina release area for a higher chance of survival, while the other duo successfully left the nest.

Three chicks at the Genesee site also made their way out into the world.