The biggest public project in the City of Edmonton's history is behind schedule.

The Valley Line LRT will be delayed by more than a year at this point, according to trends shown in city reports.

City staff have been checking the building process every quarter since construction began more than three years ago, measuring against milestones provided by TransEd when the project began. 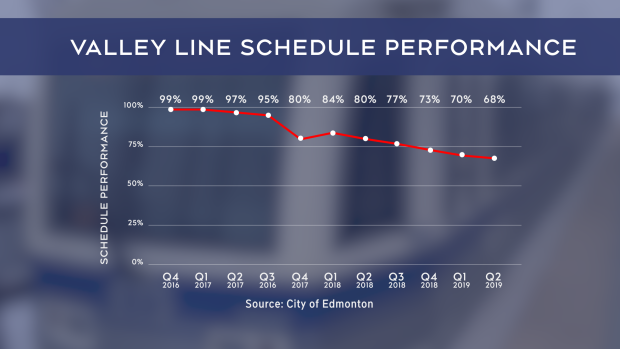 TransEd had finished 68 per cent of the work it expected to complete by June 2019 on the Valley Line. If construction continues at that pace, the line will be 13 months behind.

"Each report evaluates construction progress and milestones at a given moment in time against the baseline schedule provided by TransEd," the Integrated Infrastructure Services Department said in a statement.

Most of the construction is in Councillor Mike Nickel's ward in southeast Edmonton.

"We are just so tired of the construction and the delays," Nickel said. "At the end of the day the only metric that matters is, get out of my ward, get it finished and so we can all just get it done."

CTV News Edmonton reached out to Trans Ed for comment.  A spokesperson said the company won't speak to the city reports, but did acknowledge that there have been delays.

TransEd completed work through a number of downtown intersections ahead of schedule. But rainy weather has created challenges this summer. And crews found a concrete mass of some kind deep in the river bank early in 2018 that delayed the Tawatinâ bridge construction.

The Valley Line is supposed to be operating by December 2020. If it's delayed, TransEd loses out on about $3 million from the city every month.

The next progress report will be available in October.