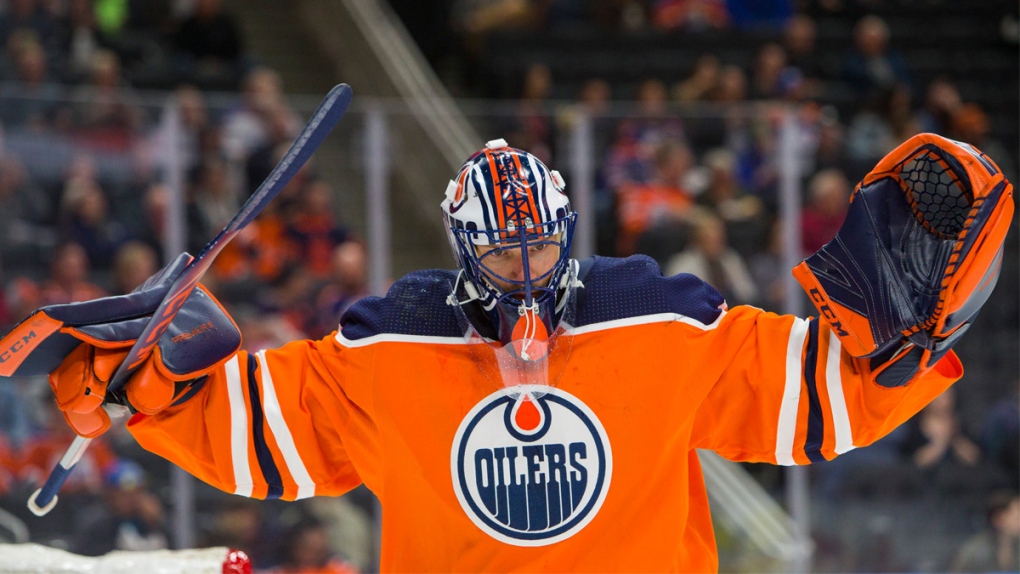 The veteran goalie said there'd be no better way to cap his career than winning hockey's ultimate prize with the Edmonton Oilers.

“My goal was to come back to Edmonton and hopefully finish my career in Edmonton,” he said Saturday after signing a two-year, US$4.4-million extension with the Oilers. “I really enjoy playing there, I really enjoy living there. I really want to do everything I can to help this team win a Stanley Cup in Edmonton.”

At 39 years old, Smith knows his opportunities to capture a championship are limited and is “very motivated” to keep playing.

“I feel like I'm at a good spot mentally and physically right now, even at my age,” he said. “I feel like I still have some unfinished business to do. I'm really excited to be back and give it another whirl with the Oilers.”

Edmonton looked poised to make a run at the Cup last season after finishing the pandemic-condensed 56-game regular-season second in the all-Canadian North Division with a 35-19-2 record.

But the Oilers faltered in the playoffs and were swept from the first round by the Winnipeg Jets.

It's an experience the team can use as fuel moving forward, Smith said.

“I feel like we have some unfinished business to do,” he said. “I'm motivated to personally play as well as I did last year and as a team, hopefully we can learn from our mistakes that happened last year and move forward and try to build on something good that happened.”

A few weeks after the disappointing defeat, Smith met with Oilers general manager Ken Holland in Kelowna, B.C., where the netminder and his family make their off-season home. The pair “hashed things out,” Smith said, and his agent has been working with the club on the details of a contract extension ever since.

Originally picked by Dallas in the fifth round (161st overall) of the 2001 NHL entry draft, Smith has played 642 regular-season games for the Stars, Lightning, Coyotes, Flames and Oilers and boasts a 283-254-76 career record.

The native of Kingston, Ont., joined Edmonton as a free agent in July 2019 and signed a single-season, US$2 million contract extension with the club in October.

Heading into his 17th NHL season, Smith said he's learned to not take anything for granted when it comes to hockey.

“I just remember my first year in the league and how fast it's gone by and the limited chances you have to win the Stanley Cup and that's the ultimate goal,” he said. “So whatever I need to do to help this team do that, I'm all in. That's the last kind of thing I need to check off on my playing career.”

This report by The Canadian Press was first published July 24, 2021.

U.S. Justice Department officials and Huawei executive Meng Wanzhou have reached a deal to resolve the criminal charges against her, allowing the woman who has been at the centre of a years-long major geopolitical case to enter into a deferred prosecution agreement and be released, under certain terms.

A draft report of the election review in Arizona's largest county by supporters of former U.S. president Donald Trump found that current U.S. President Joe Biden did indeed win the 2020 presidential contest there, an embarrassing end to a bizarre quest to find evidence supporting Trump's false claim that he lost because of fraud.

Alberta Premier Jason Kenney is confronting a full-throated justification for a pink slip thanks to his chronic tone-deafness during the pandemic, incredulously topped off by taking a two-week vacation in Europe this month as Albertans were dying from the consequences of his policies, writes Don Martin in his exclusive column for CTVNews.ca.