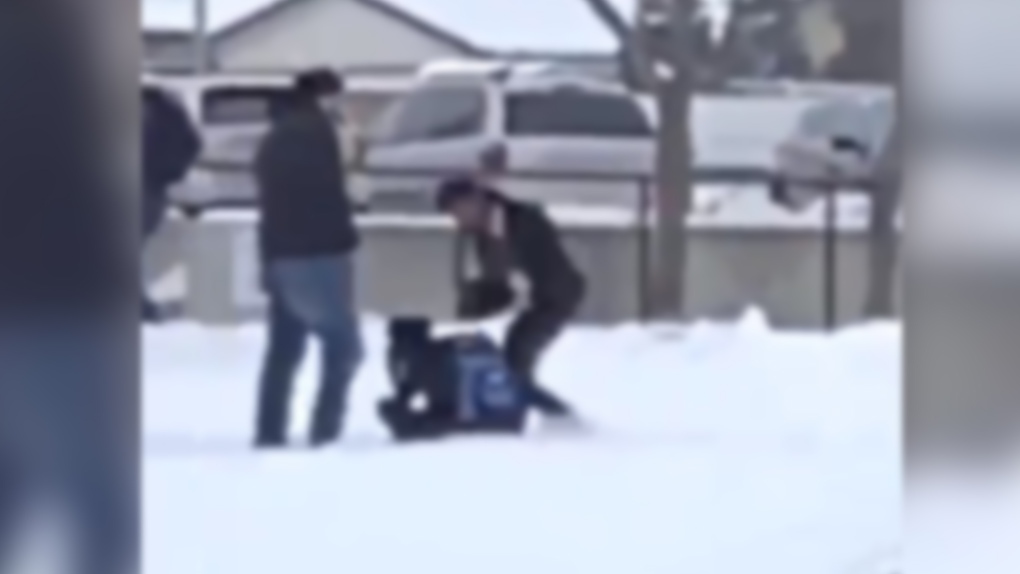 A still image from a video showing a 15-year-old being repeatedly beaten on the school grounds of J. Percy Page School. (Supplied)

EDMONTON -- A Grade 10 student is recovering after being repeatedly struck and beaten in the schoolyard at J. Percy Page over the lunch hour on Wednesday.

Video of the attack was recorded and posted to social media.

The video shows a male repeatedly punching and kicking a person who is seen sitting on the ground absorbing the blows while others nearby look on.

The man lands a combined eight punches and kicks over the course of the 17-second video.

The person who posted the video to Twitter says the boy is her brother's friend, and tweeted "a truck full of young adults who don't even go to the school came out and threatened him and his friends."

She says the attack has left the boy with a fractured skull and wrist.

Police confirmed that the victim is a boy in Grade 10. at J. Percy Page.

According to an Edmonton Police Association spokesperson, it was reported to investigators that three young male adults who were taunting kids from a red Ford truck were involved in the assault.

The victim sustained some serious injuries, including a skull fracture.

The assault was reported to police, and an officer was dispatched to the school to investigate.

The truck the assailant was riding in has been identified, and police said they are looking for three men who have no connection with the school.

It's not clear if they knew the victim.

While the Edmonton Public School Board did not provide anyone for an interview, it did issue the following written statement:

"Safety at our schools is one of our priorities, and we are concerned about the incident that occurred outside J. Percy Page School earlier this week. The school immediately contacted the Edmonton Police Service. Officers responded, and the school continues to work closely with the police as they investigate the situation.

"We know this incident is upsetting and concerning for families. All students and staff have a right to feel safe when they are travelling to and from school. We are taking the incident very seriously and the school is working to support their community.

"The school has increased outside supervision during break times and will continue to work with the Edmonton Police Service as they continue their investigation."