There is a broadly growing movement across Canada to reexamine the name of a man who believed Indigenous children needed to be "civilized" as worthy of a spot on schools and street signs.

Like its Edmonton counterpart, Greater St. Albert Catholic Schools is reviewing the names of its schools following the discovery of student remains at a former B.C. residential school. Both divisions have schools named after Vital Grandin. The Roman Catholic Bishop from St. Albert, north of Edmonton, supported the creation of and helped design Canada's residential school system. He believed young Indigenous people needed to "forget the customs, habits and language of their ancestors" in order to become civilized, the Truth and Reconciliation Commission found.

And at the city level, while petitions calling for change grow in signatures, a working circle has been revived to decide what to do at Edmonton's Grandin/Government Centre LRT Station. Not only does the location share the Grandin name, it also features a mural – commissioned in 1989 by Francophonie Jeunesse l’Alberta and painted by Edmonton artist Sylvie Nadeau – depicting the bishop and a nun removing an Indigenous child from their family. Although it was updated in 2011 in an attempt to add context, that is what it still lacks 10 years later, says one Edmontonian.

"For the Francophone community, obviously, Bishop Grandin was this really great guy, but I don't think even to them they really knew what was happening. Because even today, we don’t know the full extent of what happened in these schools," Jade Balona told CTV News Edmonton.

She started the petition one year ago that led to the current working group of survivors, Indigenous people, Francophone community members and city officials.

Although nothing has been decided yet, "I think there is a possibility of removing the mural," Balona said. Of renaming the transit stop, too, she added.

Ahead of them all is (for only a little while longer) Grandin Fish 'N' Chips on 109 Street, whose management named it that as part of a plan to eventually own several locations throughout the city.

"To be honest, we didn't even do our due diligence, which we probably should have done when we decided to name this restaurant five years ago," co-owner Kyla Kaziel said.

"We just can't – in good faith and to be renderer of the community – cannot carry on with the name Grandin anymore."

The partners began saving money to rebrand when they learned of Grandin's contribution to Canada's colonial legacy, but hoped the neighbourhood would be renamed by the time they could afford it.

With an estimate it would take a year for another community – Oliver, titled after Frank Oliver – to be renamed, the eatery's management has decided to move ahead on their own.

"You don't want to get to a point where people have to say something to force you to make a change. You make a change because you want to make that change. And we want to make it, because it's what we feel is right for the community," Kaziel said.

"To continue on with a name that does cause hurt and trauma to a community – for us – is not the right thing to do."

Although Alberta's premier has cautioned the public not to "cancel history," the discovery in B.C. and ensuing conversations have been retraumatizing to some.

A worker, who told CTV News Edmonton the school's principal instructed him not to allow pictures, covered the graffiti later that day. 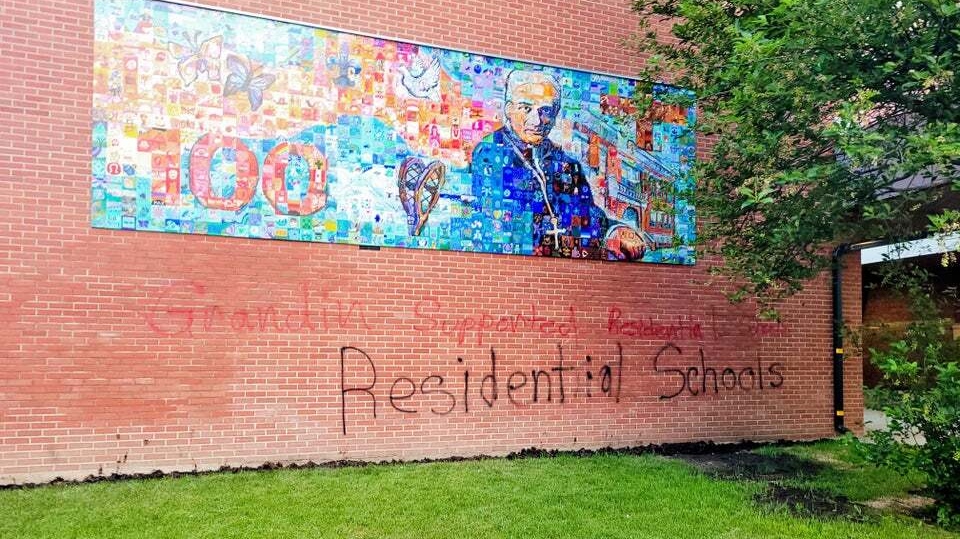 But Balona, looking at the mural at the Grandin LRT station, considers it an inaccurate portrayal of history.

"The initial painter, she just painted obviously what she knew and what she thought was right and good at the time," Balona said, noting the mural's additions portray the kids grown up and well adjusted.

"But the reality is that's probably not how they ended up."

In a statement, the president of Francophonie Jeunesse de l'Alberta said it was working to erase the harm caused by the murals at the LRT station and promised more information would come in future weeks.

"Reconciliation is a national responsibility. Every citizen has a role in this process and this recentdiscovery is a reminder that it is time for each one of us to take action," Gloria Livingston said of the findings in Kamloops.

It asked French-Albertan flags to be flown at half mast for 215 hours, until June 8.

Calgary's mayor has called for the renaming of Bishop Grandin School in that city. The city of Winnipeg has been called upon to rename Bishop Grandin Boulevard.