Bishop Vital Grandin's name has been removed from the Catholic school in the central Edmonton neighbourhood named after him.

Edmonton Catholic Schools on Monday voted unanimously to rename Grandin School and immediately remove the Grandin name and a mural depicting the Roman Catholic Bishop from the building's exterior.

Within hours, the lettering spelling Grandin across the school's brick face was gone.

The decision was made at a special ECSD board of trustees meeting that morning, also the last operational day of the school year.

Chair Sandra Palazzo opened the discussion by noting each meeting begins with a treaty acknowledgement, and referencing the discoveries of bodies at former residential schools in British Columbia and Saskatchewan.

Bishop Vital Grandin served in St. Albert during the late 1800s. Historians consider him to be one of the architects of the residential school system in Alberta.

"One thing we can do right now is to ensure that we are not elevating historical figures whose actions – actions that never should have been deemed acceptable at any point in our history – no longer reflect our societal values," trustee Debbie Engel told her colleagues.

"As we consider the gravity of these recent revelations and the history and impact of residential schools, and in response, consider renaming Grandin School, I think it is important to note we are not judging the life accomplishments of Bishop Grandin," trustee Carla Smiley added. "Rather, we as an organization that is committed to children and their well-being and growth, are making a statement about his role in residential schools."

Although the physical removal of Grandin's name from the school was immediate, Martin said a school has not needed to be renamed in recent history and the process to consult and rename it will take several months. 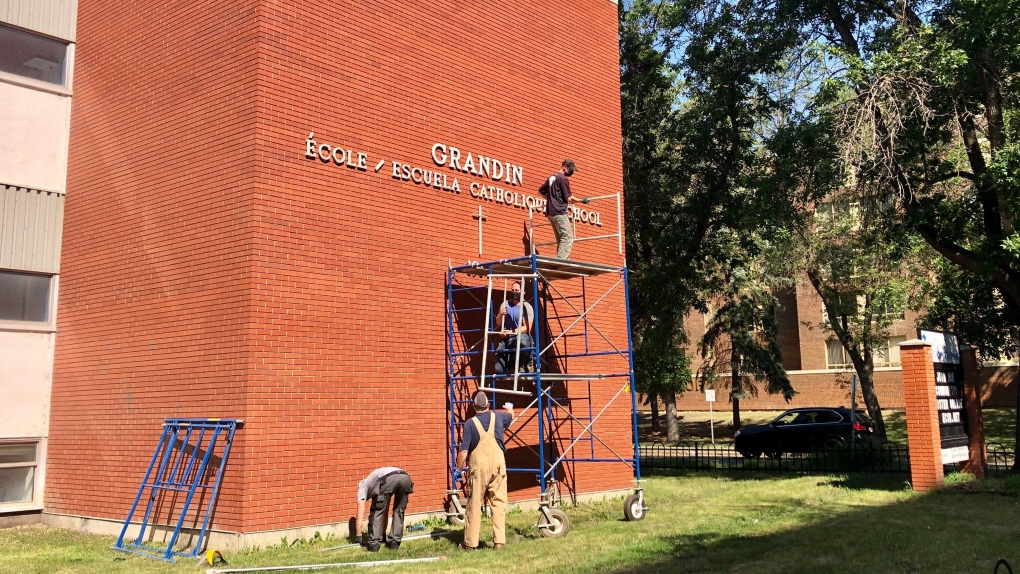 Within hours of a unanimous vote by the Edmonton Catholic School's board of trustees on June 28, 2021, Bishop Vital Grandin's name was removed from the elementary school named after him in central Edmonton.

"Very simply, I believe we are lifelong learners and as we learn and understand more and more, we move forward and do the right thing. And for me, the right thing is obviously changing the name of Vital Grandin School," trustee René Tremblay told his colleagues.

"Leaders who championed residential schooling can no longer be namesakes of our schools. Although we cannot erase history, we can reimage the concept of history," added trustee Joan Crockett.

Edmonton Catholic School Division launched a review of Grandin's name at the beginning of June following the discovery of the remains of 215 children at the former Kamloops Residential School in B.C.

The French and Spanish language school, which opened 105 years ago in central Edmonton, is not the only location that bore the bishop's name.

A community business also decided to rebrand, and the City of Edmonton removed Grandin’s name from its Government Centre LRT station on June 7. Other jurisdictions across Canada have already changed or signalled their intent to change landmarks named after him, too.

St. Albert councillors voted unanimously a week earlier to review the process by which it names landmarks after finding about 600 businesses, streets, civic sites and municipal properties with "some level" of association to Grandin or Canada's residential school system.

The city also cancelled its annual July 1 fireworks out of respect for survivors of the residential school system.