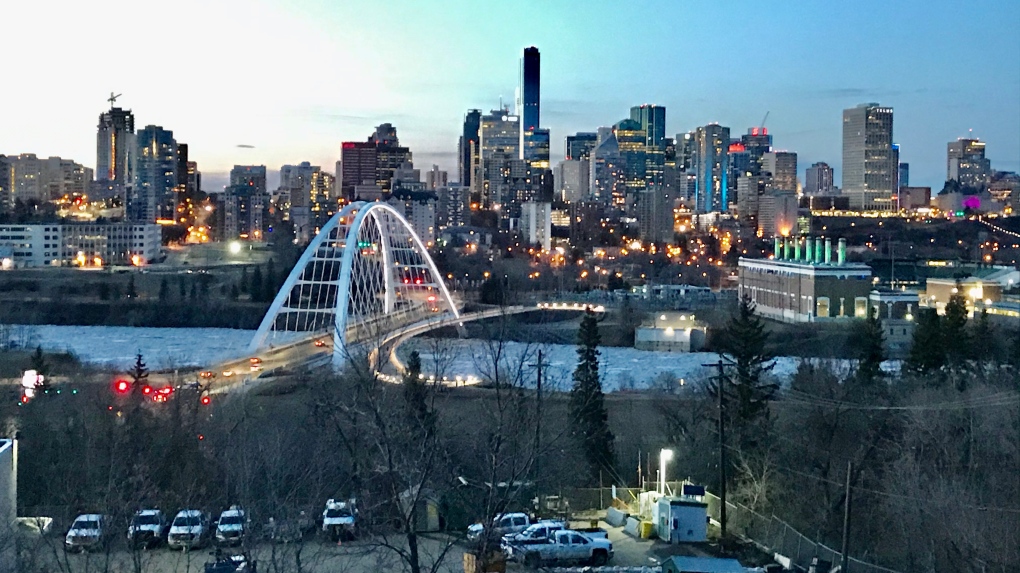 View of downtown Edmonton from the south side of the North Saskatchewan River. Tuesday April 21, 2020 (Seam Amato/CTV News Edmonton)

EDMONTON -- Just days into warmer temperatures in Edmonton, some are already fed up with loud vehicles revving and racing through downtown, the river valley and Whyte Avenue.

Arbeau has lived downtown for about 15 years. His balcony overlooks Bellamy Hill and Rossdale Road in the river valley.

Arbeau is not sure it’s worse this year than any other, but the noise annoys him.

“You have to pause your TV program because you can’t hear over the revs and the acceleration that’s going on outside,” Arbeau said.

“Last night (Monday) was ridiculously annoying...and I’m a car guy,” Ian O’Donnell with the Downtown Business Association wrote on Twitter, adding an email about the issue had been written to police and local councillors.

On Tuesday Edmonton Police Service issued a second warning to drivers in three weeks. EPS said some are speeding through pandemic-quiet roads like it’s “Castrol Raceway.”

“Some people are obviously feeling the effects of cabin fever having been cooped up at home for the last several weeks,” explained Sgt. Kerry Bates. “We get it, though regardless, you’re creating a lot of unnecessary risk for yourselves and those on the roads around you when you decide to drive with reckless abandon.”

CTV News Edmonton asked EPS for statistics on vehicle noise complaints Tuesday but the service did not provide any.

In an email, EPS Spokesperson Scott Pattison said “our hands are full with policing in a pandemic,” adding he had no information on upcoming noise enforcement plans in the city centre.

Downtown Councillor Scott McKeen agreed police have bigger priorities but said the noise is a problem.

“It looks bad. It looks like somebody overcompensating for some deficit in character or physiology,” McKeen said.

McKeen acknowledged many drivers of motorcycles, hot rods and diesel trucks slow down and are being respectful, but said too many aren’t.

The city is testing a pilot program that aims to measure and ticket noise bylaw offenders, similar to a photo-radar system.

McKeen has hope that system will help, but he also said city council will have to look into raising fines and getting peace officers to help police enforce noise bylaws.

“If you’re getting a $175 or $250 fine once or twice a season, for some people, that might just be the cost of doing business with them,” McKeen said.

NOT EVERYONE DISLIKES ENGINE NOISE

Bradly Tucker is a contributing editor for GarageShots magazine, and owns two “summer toys” including a 1951 Ford hot rod.

“It’s a sound of summer to me,” Tucker said of a little engine-revving.

For the Tuckers, “cruising” is a family event and something his daughters enjoy.

“On a beautiful evening we do one lap up Jasper and one down Whyte,” Tucker said, although he acknowledged some in the city have been taking the noise and speed too far.

“You’re probably looking at about 5% are the bad guys who are giving everyone black eyes,” he said. “It’s usually the young crowd out there making noise cause they don’t know any better yet.”

Tucker encourages car enthusiasts to take their rides to nearby tracks.

He also suggested the city authorize a designated “cruise night” where drivers were allowed to make a little noise in exchange for agreeing to keep it down at other times.

For Arbeau, a local drummer who’s not afraid of noise, the frustrating part is that he said offenders are targeting residential areas late at night, and not just once a day.

“It seems to be like a regular track. It’s not just one pass and done. It seems like they revisit the same route. Like you can set a watch to it like, ‘here they come again,’” Arbeau said.