How a sea can is powering the Blatchford redevelopment 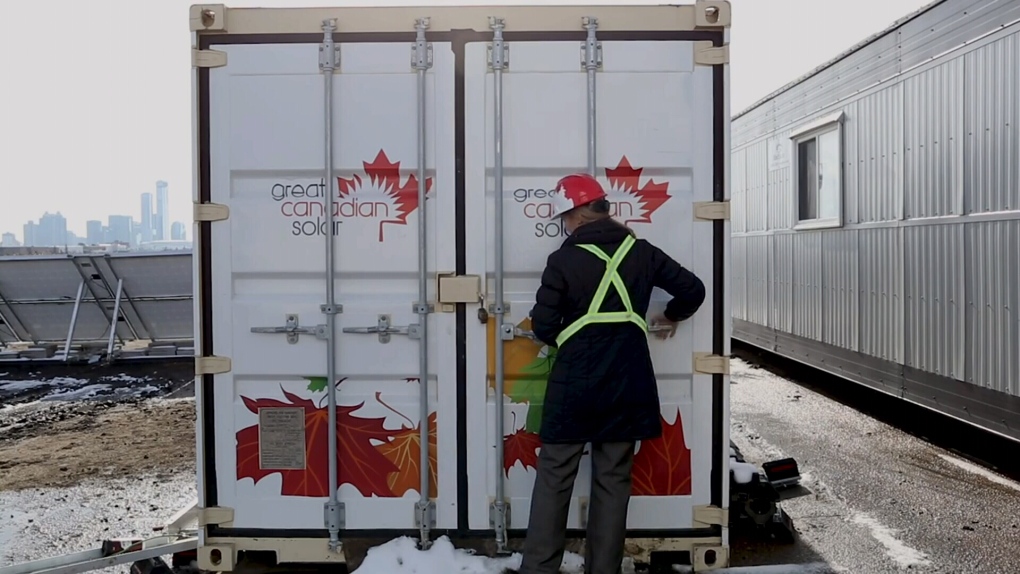 The solar sea can contains 44 solar modules that are held in the 20-foot container by a collapsible racking system that allows for easy installation and clean up. Courtesy: Great Canadian Solar.

Peers Csilla Harsasi and Aaron McGregor were given their final project by Edmonton-based Great Canadian Solar last September. Their task was to design a solar power energy system, homed in a sea container, that could provide inexpensive, green energy to remote work sites.

With Great Canadian Solar, the students designed a system of 44 solar modules, unique in that all of the solar panels are flexible and detachable from the sea can base.

The modules are stored in the sea can by a collapsible racking system that makes the panels easy to remove from or store in the 20-foot container. The system is designed to withstand 60 km/h wind and takes about two hours to install.

“As far as we know, no one has done this type of racking design before,” Harsasi said. “We didn’t come up anything brand new. We just did it a bit differently so it’s more customer friendly.”

The first and only unit by the grads currently powers two trailers at Edmonton’s Blatchford redevelopment site, where it is being tested by site contractor Chandos Construction until spring.

But Harsasi said the solar sea can would be ideal for use in remote work sites, particularly in the oil and gas or construction industries.

The sea can uses a smaller battery bank that recharges quickly, and is able to support a large power draw. However, it could also be started with a generator until the bank is full and solar energy is available.

This feature, Harsasi said, could also make it useful in emergency situations.

“The way we see it, the possibilities are almost endless for this unit.”

The project’s major benefit isn’t in the energy it generates—but the savings. According to Harsasi, the unit is cheaper than buying and operating a generator, and could power up to four trailers at the Blatchford site.

When asked if her design could withstand the frigid temperatures of a Canadian winter, Harsasi replied without hesitation: “It will work just fine.”

The solar sea can will be monitored at Blatchford throughout the winter. More units like it could be built and rented out in the future, Harsasi said.

She’ll continue working on the project with Great Canadian Solar, where she was hired as an alternative energy technologist after graduation.