'I don't feel safe': Edmonton SafeWalk program hopes to expand to other parts of the city

'I don't feel safe': Edmonton SafeWalk program hopes to expand to other parts of the city

A northeast Edmonton program helping women feel more secure while walking hopes to expand to other neighbourhoods in the city.

Edmonton SafeWalk is a pilot program launched this summer in response to the rising number of Muslim women being attacked.

“A lot of people might think that we don’t hear of Muslim women being attacked and that the issue is gone, but it’s not,” said Wati Rahmat, the founder of Sisters Dialogue.

“Muslim women, especially our Black Muslim women, are still being harassed and attacked and facing discrimination and hate,” she added.

Incidents that have left many women feeling anxious or afraid to go out alone for something as simple as a walk through the neighbourhood alone.

The Safewalk program allows women to go online to request a walk with a trained volunteer.

“They go through anti-oppression and some cultural sensitivity training and then a criminal record check,” said Leslee Mackey, Program Coordinator with the Edmonton Federation of Community Leagues.

“We’ve had 43 total reach out, some of them just to say if this program ever comes to my neighbourhood, let me know. So far, 18 have completed the volunteer training and police checks,” Mackey added.

But since starting the pilot, only seven walks have been done through the program, many of them group walks through the river valley.

“In terms of women who want to walk right in the northeast where the pilot is, is where we’re seeing less than we had originally hoped,” Mackey said.

“Really, we’re reaching out to the most vulnerable of women who are isolated and afraid to go out, so there was a bit of learning in terms of building trust,” Rahmat said. 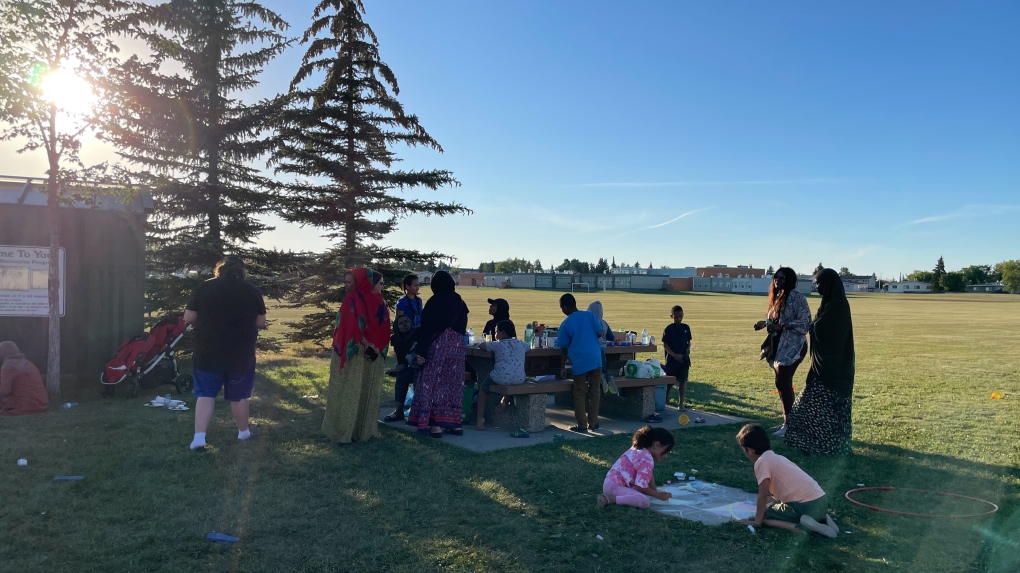 “Bringing out families, women and their kids, in a culturally sensitive programming like this where we bring Halal food so women feel comfortable to come and food that they’re familiar with,” said Rahmat.

There are also games and activities for the kids. Officials said it’s an environment they hope women not only feel safe but can connect.

“There’s a layer of connection and relationship building that might need to happen prior to women feeling comfortable signing up to go on a safewalk,” Mackey added.

Alia Hanena brings her daughter to the playground program. A place both of them have made new friends.

She drives to northeast Edmonton from downtown just to take part.

“To be honest, I don’t feel safe and I hope that the program will be expand to there. I never get chance to go walk by myself,” Hanena said.

The EFCL said it’s heard loud and clear from residents who want the Safewalk program to expand to other parts of the city.

“So if it happens that there’s a volunteer from the same neighbourhood that someone’s reaching out from we’re just now at the capacity to try and be able to set that up,” Mackey said.

She said several community leagues have also expressed interest in the program.

“They’d like to explore getting their own funding and piloting a model in their neighbourhood,” Mackey said.

“It creates the network where eventually that’s our hope where we can create networks where neighbours can keep each other safe,” Rahmat said.