EDMONTON -- More than a decade after the City Centre Airport was ordered to start shutting down, homeowners will soon move into what is now the neighbourhood of Blatchford.

The massive City of Edmonton-run development north of downtown was promised to be an environmentally sustainable community of 30,000 people someday.

Seven years after the final plane took off, Blatchford has a population of zero. But that will soon change.

A handful of row-housing units have been sold and a ceremonial ribbon cutting is being planned for this fall on land that was once home to the first licensed airfield in Canada, built in 1927.

The site was also the centrepiece of a bitter city-wide dispute before and after the 2009 city council decision to close the airport in phases.

“We went through some tough times, a lot of frustration and we created a lot of angry people...but it was the right decision,” former Edmonton Mayor Stephen Mandel told CTV News Edmonton.

Height limits restricting downtown tower development, the need to densify a growing city and the airport “only being used by a handful of people” are among the reasons Mandel stands by his vote to move on from the airport.

“I’m glad it’s finally happening. It’s a great location, it’s a great project and it should be successful,” Mandel said, adding he hasn’t intensely followed the development since he left the mayor's office in 2013, in part because he doesn’t want to interfere with the current council.

Critics of the decision - including a local group called Envision Edmonton - launched a petition, held protests and supported pro-airport candidates in the 2010 municipal election in an effort to replace Mandel and other members of council and keep the airport open.

Mandel said he was sworn at in the streets - and accused of corruption - but he doesn’t regret taking firm stances on controversial issues like Blatchford and the downtown arena.

“I can’t tell you the number of people who came up to me and said: ‘you own land around the arena and land around [Blatchford]. I didn’t! If I did, it be in trouble,” Mandel recalled, addressing a well-circulated rumour at the time.

“It was the same thing with the decision on the arena," he said. "You’re not elected to take the easy way out. You’re elected to make tough decisions. Sometimes they’re popular, sometimes they’re not. But you have to have a vision for where you want the city to go."

THE VISION FOR BLATCHFORD

Since then, crews have been removing builds and runways, installing the geothermal District Energy Sharing System and building a massive recreational pond as part of the central park feature.

The site itself is 536 acres, about the size of Edmonton’s entire downtown core according to the development's website, which lists four different builders.

“Blatchford will be home to up to 30,000 Edmontonians living, working and learning in a sustainable community that uses 100% renewable energy, is carbon neutral, significantly reduces its ecological footprint, and empowers residents to pursue a range of sustainable lifestyle choices,” Blatchford’s website reads.

To the south of the site is a breathtaking view of downtown Edmonton, shiny and new itself with an NHL arena and adjoining high rises that couldn’t have been built while downtown was still on the old airport flight path. 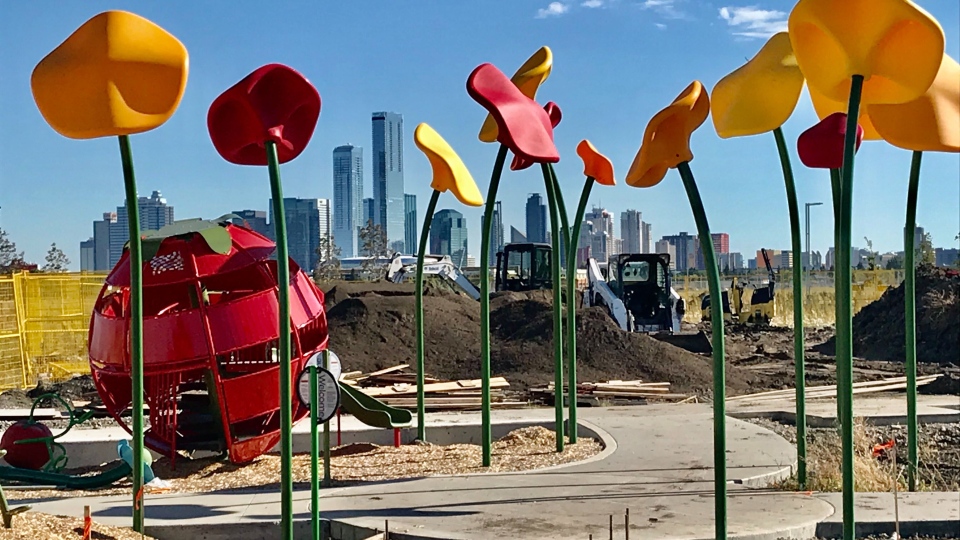 While growing up in northern Alberta, Tegan Martin-Drysdale used to fly in an out of the heritage airport. Now she’s president of RedBrick Real Estate Services and Ocheller Homes and is building eight units in Blatchford.

“I understood the convenience factor when it was an airport. But when you’re building a city you have to think bigger than that, and you have to think about the future generations to come,” Martin-Drysdale said.

She said her units will include solar panels, which will bring her project “very close” to net-zero efficiency.

“I’m excited to be building housing for that next generation that’s going to understand how we can live on this land and on this earth sustainably and not contributing to the climate change that we’ve done in the last couple hundred years,” Martin-Drysdale said.

Now that the land is clear and the utilities are installed, Martin-Drysdale said momentum and excitement for the project will also build.

A small plot of row housing, condos and four-to six storey mixed-use buildings is included in phase one of the project.

Higher density commercial development will start to take shape on the southern tip in the coming years, and an LRT station is also part of the plan.

A park surrounds the familiar old air traffic control tower, and there are small touches celebrating the history of the land, like a pathway built to look like a runway.

Mandel said he’d hoped Blatchford had moved faster, but that it is not uncommon for governments to slow down development progress.

A developer himself, he acknowledged the challenges of building something spectacular and unique in its environmentally-friendly features.

“We wanted to have a sustainable, creative, dynamic neighbourhood. But it still has to be practical," Mandel said. "There’s no sense in building a neighbourhood that isn’t going to sell because the lots are too expensive. So it’s a fine balance."

Edmonton’s 34th Mayor, now a mostly-retired grandfather, hasn’t gone for a walk on the property yet, but said he like to do that quietly.

All these years later, he still holds hope that the finished project will be worth what it took to get it done.

“The sooner it gets built, the better off Edmontonians will be, but it won’t change the fact it was the right decision at the time,” he said.