An Edmonton family trying to show solidarity with Ukraine was startled this morning when their flag had been stolen.

The Wreikkinen family decided to hang a Ukrainian flag in their front yard after Russia invaded that country. Surveillance footage shared with CTV News Edmonton shows someone grabbing the flag from their display early Thursday morning.

"We don't have Ukrainian heritage, but we are allies for anyone who is facing that kind of atrocity," Dellas Wreikkinen told CTV News.

"Taking a Ukrainian flag in the opening week or weeks of war, is that spite, is that anger, is that theft? I don't know," he added.

"It's those questions of I don't know that I think are truly disturbing to me. It's uncalled for."

Wreikkinen's ' 10-year-old son, Augustus, said after learning about the war in Ukraine in social studies class, he was proud to have the Ukrainian flag in front of his house.

"I was kind of shocked that they would steal it in this kind of time because there's a war going on," Augustus said. "It doesn't really make sense to me because we are supporting a good cause."

Unfortunately, Wreikkinen says this is not the first time a sign or flag supporting a cause or movement has been stolen or vandalized.

He shared the story on social media and was overwhelmed by dozens of people offering to buy the family a new flag.

"We want to thank (everyone)," he said. "We ask (those who wanted to support us) to maybe pay it forward, to a charity that matters (instead)."

The family will file a police report and hope it is an isolated incident.

Dellas also worries about finding a flag, as stores across Edmonton have been inundated with requests to buy Ukrainian flags since the war started.

Phyllis Bright, owner of The Flag Shop, says the store has sold more than 200 flags in different sizes since Thursday.

"The customers have been coming fast and furious," she told CTV News Edmonton.

"We have wonderful suppliers, most of them in eastern Canada," she added. "They send stuff in as they can. When it comes in, it's gone."

The store now has a waiting list for Ukrainian flags, Bright said, with everyone understanding the situation.

"It's very emotional," she said. "We have customers who have relatives there.

"They spend hours trying to get a hold of their family members. We are happy to listen because it is such an emotional time. I just can't imagine." 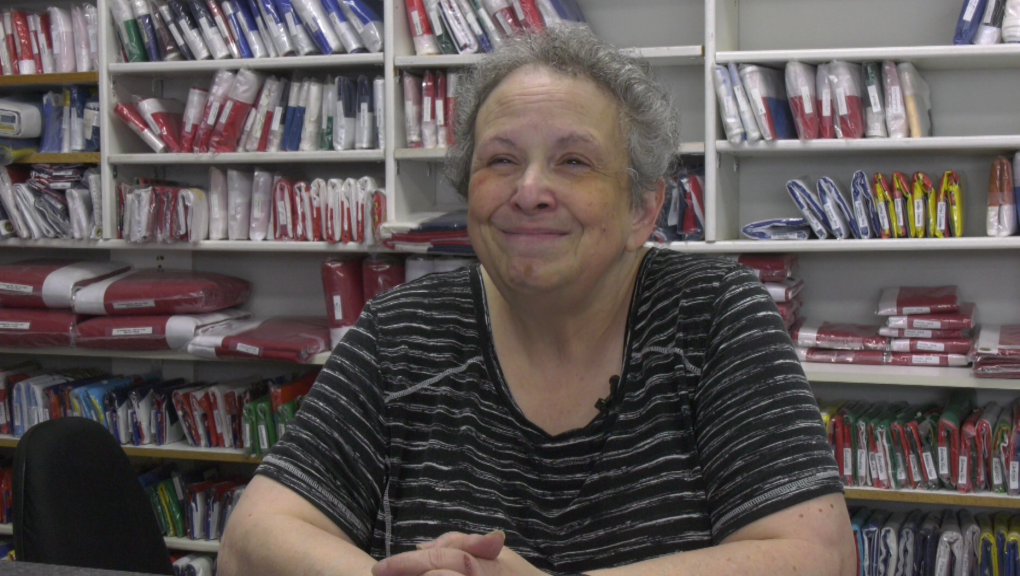 Phyllis Bright, owner of The Flag Shop, told CTV News Edmonton that the store is selling out of Ukrainian flags as soon as they come back in stock (CTV News Edmonton/Alison MacKinnon).

For Bright, flags are an essential expression of identity, even more critical during a crisis.

"I know when I look at the Canada flag, I feel a sense of pride. That's my flag," Bright said. "That's true for people all over the world.

"So for people with Ukrainian ties to be able to have something blue and yellow is very important," she added.

"It's just a really difficult time, and if we can make it just a tiny bit less difficult for someone, I'm happy that we can do that."