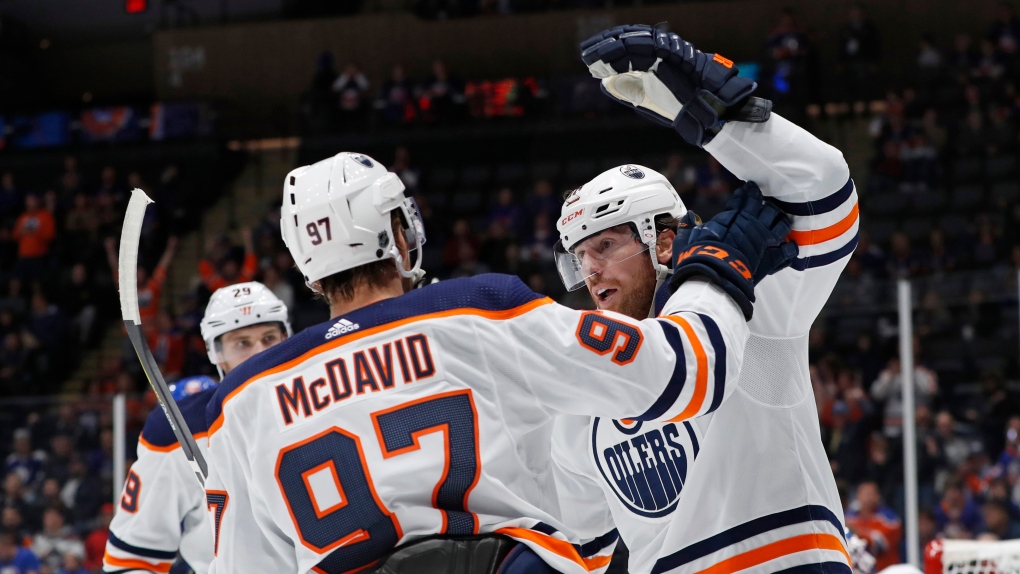 EDMONTON -- The puck felt more like a rock to James Neal, and the net an ocean, as he scored four goals including a natural hat trick in the Oilers 5-2 win against the Islanders to open a four-game road trip.

The Islanders would strike first, as Anthony Beauvillier scored his second of the season 14:14 into the first period.

That apparently poked the bear that is James Neal.

Just 3:39 after taking the 1-0 lead, Neal forced an Islanders turnover deep in their defensive zone.

The puck eventually found its way to Neal’s stick at the top of the right faceoff circle, where he ripped it past Semyon Varlamov for his first of the game.

Neal netted his second just 1:36 later when he took a Connor McDavid pass at the side of the net, just above the goal line, and slid it past Varlamov for his fourth of the season and the 2-1 lead. Darnell Nurse also picked up an assist on the play.

Neal would complete the natural hat trick 7:30 into the second period, finishing off a beautiful ‘tic-tac-toe’ passing play while on the power play.

McDavid got it started going cross-ice to Leon Draisaitl, who quickly put a hard pass on the tape of Neal who tipped it past Varlamov on the doorstep for the 3-1 lead.

The scoring barrage continued just 2:15 later when McDavid and Draisaitl set up a similar play, this time setting up Zack Kassian for his third of the season, giving the Oil a 4-1 lead, and Varlamov the hook.

But not even Thomas Greiss could help New York stop the “real deal” in this one. Less than seven minutes into the third, after making the initial pass to Thomas Jurco at the offensive blue line, Neal one-timed the return pass from a sharp angle, beating Greiss five-hole for his fourth, and the Oilers fifth of the night.

Matt Martin would add one more for the Islanders, but it was way too little, far too late.

Neal’s performance gives him six goals just three games into the season. That’s one less than his entire 2018-19 total, the same amount as Milan Lucic, who the Calgary Flames traded him for, scored for the Oilers last season.

Draisaitl and McDavid also had a strong outing, recording two and three points respectively while Mikko Koskinen made 25 saves in his first start of the season.

Neal’s six goals also gives him one more than Toronto Maple Leafs’ Auston Matthews, and Anthony Mantha of the Detroit Red Wings for the league lead.

McDavid now shares the lead in points with Mika Zibanejad of the New York Rangers with eight, while his 6 assists ties him with linemate Leon Draisaitl and Matt Duchene of the Nashville Predators  for the lead in that category.

The Oilers will try to keep the undefeated streak intact on Thursday against the Devils in New Jersey.