EDMONTON -- The story of a legendary Canadian aviator will soon be brought to life by local filmmakers with the help of an Edmonton museum.

Wilfred 'Wop' May was a pioneering Edmonton airman in the early 20th century. Flying his maiden combat mission in the First World War, he narrowly escaped a blistering attack by The Red Baron. Later venturing north as a bush pilot, he connected remote communities to the rest of Canada, then became a respected flight instructor and worked in commercial aviation.

Fredrick Kroetsch is co-directing Wop May, The Untold Story, and believes the aviator's remarkable life deserves to be well known.

“Wop May is one of Edmonton’s greatest heroes,” Kroetsch told CTV News Edmonton.

“The neighbourhood of Mayfield is named after him. The Aviation Museum is actually, at Blatchford, he used to work here, in World War 2. His history is all around us and a lot of people don’t know that.”

The creative documentary is being shot at Edmonton’s Alberta Aviation Museum, utilizing vintage aircraft and backdrops. The production will also soon take to the air in a biplane, with in-flight sequences being shot at Wetaskiwin.

A narrative thread in the tale will come with some insights from the pilot’s son, Denny May. He says the film producers want to get a unique perspective on his legendary father.

“Personal things, like how it was living with my dad, what was he like. Those are things people don’t normally ask me.” May said.

“They ask me about the things he’s done, not who he was, so that was kind of neat.”

As they explored the May’s career, the producers were surprised with other aspects of the story, beyond his colourful flying exploits.

"The scene we’re filming right now is when he helped get Margaret Littlewood hired,” Kroetsch explained. “Hired one of the first females to be a pilot trainer in this building. So he was a really important figure in so many different ways, and we want to tell that full story.”

The finished film will run about 20 minutes, and will eventually find a permanent home playing at the museum, supplementing an existing Wop May story display. 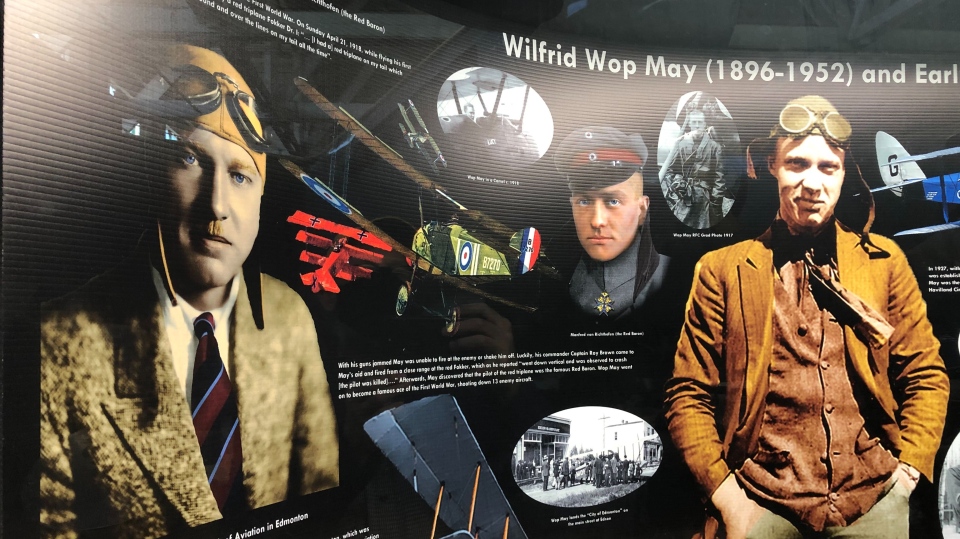 While he doesn’t have a release date yet, Kroetsch also hopes to take the film to international festivals, giving Wop May’s story a truly global audience.

“We kind of want to let the world know about this amazing Edmonton hero. It’s really exciting,” the director exclaims.

Dreaming of bigger things, Fredrick Kroetsch hopes this isn’t the end of bringing Wop May’s story to the world.

“One of my long-term life goals would be to turn this into a big budget, high end, lots of special effects feature film, because Wop May’s life truly is cinematic and a great story. Now, if could just get an arts grant for like $50 million, we’re gonna do it!”