EDMONTON -- A group has set up camp at the greenspace at 104 Street and 96 Avenue to protest police violence.

The group, which includes frontline outreach and housing workers, Black, Indigenous and racialized community organizers, and friends and family and those with lived experiences of homelessness, is calling itself pekiwewin Camp, a solidarity and resource camp against police violence. According to a news release, members plan to occupy the space until the city commits to divesting $39 million from the Edmonton Police Service budget.

The area has a “Private Property, No parking except during ballpark events” sign erected by the City of Edmonton. 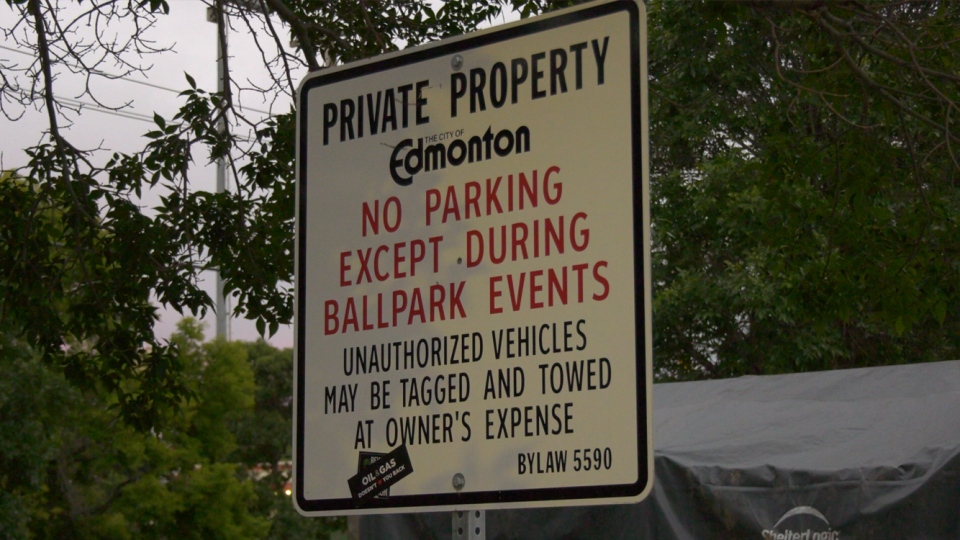 The City of Edmonton said it is aware of the camp, and sent the following written statement to CTV News Edmonton:

"The City of Edmonton Peace Officers are aware of the established camps and the protest. The Peace Officers are in contact with Edmonton Police Service and are monitoring the situation closely. Should the situation escalate, peace officers will connect with EPS, so that EPS can coordinate a response if required. As part of any response to the camps, peace officers will work with our social agency partners on next steps to measure community impacts and assess camp removals with consideration of the impacts on vulnerable populations and surrounding communities."

The Edmonton Police Service also responded to the protest.

"The Edmonton Police Service is aware of a demonstration in the area of 96 Street and 104 Avenue that is also reportedly collecting and distributing donations for Edmonton’s vulnerable communities. Our officers have reached out to the organizers of the group and the property owner, the City of Edmonton.

As with all public demonstrations, the EPS has reached out to the organizers to support them in upholding their rights and holding a safe demonstration within the context of the law and public health orders. Upholding charter rights, laws and public health orders can be a delicate task in the context of demonstrations, but the EPS will continue to work with our partners at the City of Edmonton to connect with the group’s organizers and ensure that the proper balance is struck."

“Community will be reclaiming the space that has been a traditional gathering place, trading, burial and ceremonial grounds amongst many Indigenous families for generations,” reads a news release sent out by Black Lives Matter YEG about the occupation.

The group said it has erected a tipi and lit a sacred fire. There are also a number of sleeping and pavilion type tents at the camp.

Organizers said that police officers are one of the largest health and safety risks to the homeless communities in the city, because Black and Indigenous people disproportionately experience homelessness compared to white people.

The group also said the city failed to support those who have experienced homelessness through the pandemic.

“The City of Edmonton failed to provide accessible or adequate public washrooms and hygiene facilities for houseless community members,” the release said.

“Many community members have felt safer in their tent encampment and chose to isolate where they were best able to.”

The city responded to the group’s claims about washrooms in its statement.

“In response to the increased need for hygiene facilities for rough sleepers during the pandemic, the City secured the provision of attendants through Boyle Street Ventures at Dawson and Louise McKinney Park washrooms, in addition to extending hours of operation at Churchill Square's washroom.”

Black Lives Matter YEG said police and the city have already asked for the occupation to be dismantled, but the group said it will not leave the site until its demands are met.

1. An end to Racialized Cop Violence against people with lived experiences of homelessness. An end to tent slashing, pepper spraying, destruction and theft of people’s property and only dwellings.

2. The City of Edmonton and Edmonton Area Law Enforcement to follow the recommendations of the CDC, frontline workers and those with lived experiences of homelessness to desist from the forcible displacement and removal of people from encampments or their only dwellings.

4. Free Transit. People have the right to move between spaces.

5. Dismantling of racist bylaws that perpetually erode the security, safety and dignity of people with no fixed address and communities with lived experiences of homelessness.

6. Recognize the legal protections against unreasonable search and seizure by the state for “houseless” people and their encampments under Sect. 8 of the Charter of Rights and Freedoms. We demand encampments be legitimately recognized as property and protected as homes. Additionally, we demand an honouring of inherent “Aboriginal Title” and Treaty Rights for many unhoused Indigenous peoples to occupy their territories within the urban centre.