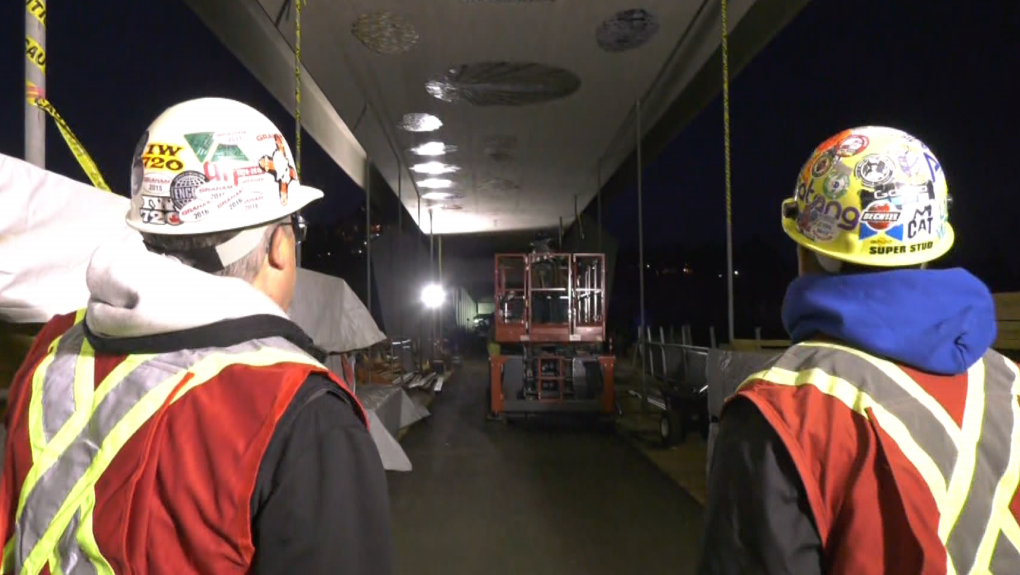 Edmonton’s new pathway across the North Saskatchewan River will include an artful journey through Indigenous history.

Hundreds of painted panels are being installed this week on the new Tawatinâ Bridge.

They’ll be stuck to the underside of the concrete Valley Line LRT deck, which is also the ceiling of the pedestrian crossing underneath.

The Métis man designing the project isn't exactly sure how many pieces the final installation will include, but it’s a lot.

“I couldn’t tell you. I give a round number of 400, but there are many small pieces and some may not make the cut,” David Garneau told CTV News Edmonton during installation Wednesday night.

Garneau painted about half of the panels and a team of about a dozen of his art students contributed the rest.

The artwork honours the Indigenous history of amiskwacîwâskahikan, which translates to “beaver hills house” and is a traditional name for the Edmonton area.

Garneau said his own roots in the area date back to 1874 when his Métis family moved here after the Red River Resistance.

“A lot of the themes are Métis themes, First Nations…that’s the human element. But there’s also the natural element. There’s medicine plants, there’s all kinds of animals and birds, everything that’s in this area has some presence on this bridge,” he explained.

Garneau also included a tribute to Edmonton’s more recent past, by adding some of the things residents carved into the old Cloverdale Footbridge. That bridge was dismantled in 2016 to make way for the new crossing.

As for the meaning of the Indigenous artwork, Garneau said he didn’t write that down, and he won’t.

“Quite a few things are very self evident, humorous or obvious, but the other things have a sort of Cree knowledge or Métis knowledge to them. So some Elder or storykeeper will have to bring that to life. It’s something people bring to life with their own stories,” he said.

The 260-metre Tawatinâ Bridge, which is nearly the length of three football fields, is expected to open in November.

NATO declared Russia the 'most significant and direct threat' to its members' peace and security, as the military alliance met Wednesday to confront what NATO's chief called the biggest security crisis since World War II.