EDMONTON -- The man who led the civic charge to build a new downtown arena – and effectively end the use of Edmonton’s Coliseum – is now part of a group trying to save the old building from demolition.

“I deeply believe we need to preserve the building and it can be a great asset to the development of that area,” former mayor Stephen Mandel said.

In 2013, then-mayor Mandel lead a 10-3 council vote in favour of spending $480 million in public funding to build Rogers Place in downtown Edmonton.

That vote marked a milestone in the Oilers hockey team moving from the Coliseum (then known as Rexall Place) to the new downtown complex in 2016.

Council voted to permanently close the Coliseum in 2018, but Mandel argued Tuesday its use as a sports facility is not done.

Mandel is part of a local group speaking out against a City of Edmonton redevelopment plan that would see the Coliseum demolished.

He feels the building can still be home to local sports, including basketball, volleyball, track and field.

“I don’t believe that we should tear it down. I believe there’s a utility left for that (building),” Mandel said.

A city report outlines a different vision for the site, which Mandel said he’s not against – provided a repurposed Coliseum is part of a revised plan.

That plan calls for a transit village with a bus loop, urban plaza, and residential units to replace the former home of the Oilers. 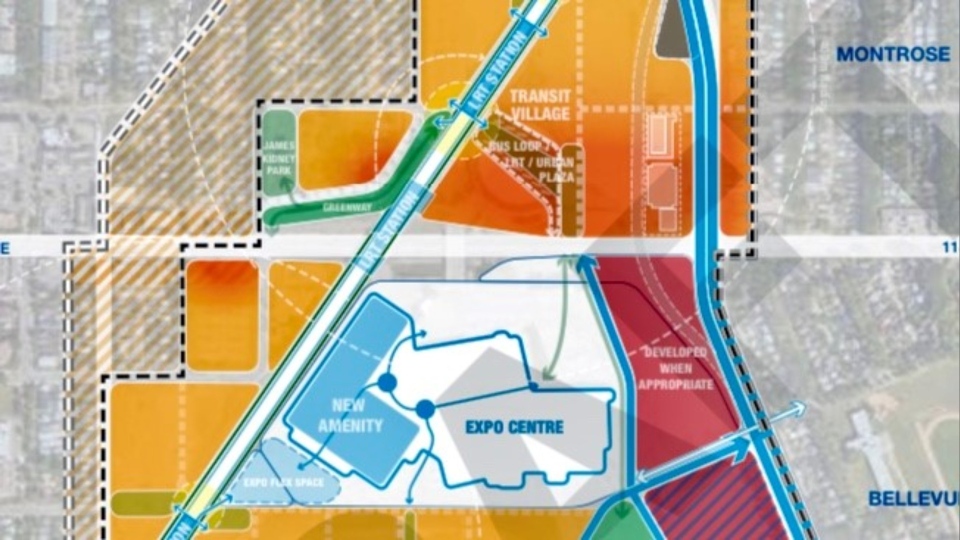 “At 200 acres, Exhibition Lands is the City’s second-largest urban infill site. Its premier location close to downtown, LRT and transit, the river valley, a vibrant park area and green space amenities makes this a prime opportunity for Edmonton and its big ideas,” the report reads.

A copy of the bylaw needs to be sent to the Edmonton Metropolitan Region Board for approval before council can vote on third reading.

Mandel asked council to postpone a decision on demolition for a few months so his group can prepare and present a formal presentation.

He said the facility could be renovated and repurposed to include several floors that would house a 200m indoor track and volleyball and basketball courts.

The centre would be open to all Edmontonians, but would not include sheets of ice, Sir said.

Mandel was questioned by several city councillors about how previous ideas to repurpose the building proved too costly, but Mandel pointed out court facilities are much cheaper to build and maintain than an ice facility.

The former mayor acknowledged the proposal may require an unspecified cash investment from taxpayers, but argued demolition and redevelopment would also cost the city.

Mandel said he would be willing to talk to Oilers owner Daryl Katz about a legal agreement between he and the city that says the Coliseum will not compete with Rogers Place.

“I can’t believe the Katz Group would look at this as competition to them,” Mandel said of the facility, which is not planned for large-scale professional sports or entertainment events.

Mandel said he would not benefit from the not-for-profit project, but was involved because he wanted to help build something great in north Edmonton.

Mayor Don Iveson said he had more questions about Mandel’s pitch but was initially concerned about what it might cost taxpayers.

“It’s a bit of a Hail Mary from half court,” Iveson said of Mandel's proposal.

The Coliseum opened in 1974 as Northlands Coliseum and has also been known as Edmonton Coliseum, Skyreach Centre and Rexall Place.