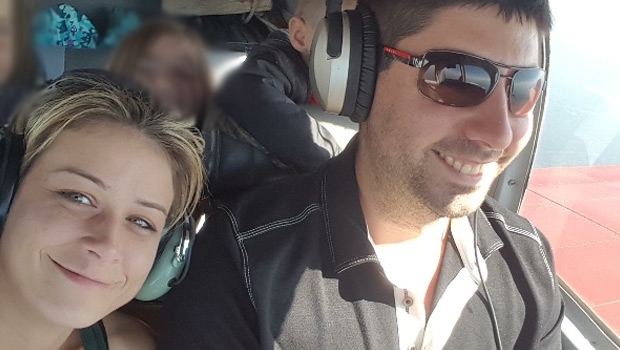 Ashley Bourgeault and Dominic Neron are seen in a photo posted online. (Supplied)

In the week leading up to Ashley Bourgeault’s 32th birthday, her 9-year-old daughter slept with a memento rock as the family continues to have questions about what happened to the missing plane she was on, her sister-in-law told CTV News.

It’s been four months since a single-engine plane carrying Bourgeault and her boyfriend the pilot, 28-year-old Dominic Neron, dropped off the radar, but their loved ones have new leads that may help in the search efforts.

“We’re realistic, we know chances are very slim, but until we have that closure, we will always hold onto that hope,” said Fraser.

“Above and beyond what anyone of us is feeling, we want their mommy home.”

‘What if they’re out there alive?’

The couple took off from Penticton, B.C. and headed to Edmonton about 2:30 p.m. on November 25.

The Victoria Joint Rescue Co-ordination Centre (JRCC Victoria) received an alert about eight hours later, after a signal from the Neron's cellphone was picked up off a cell tower northeast of Revelstoke, B.C.

A little over a week later, the JRCC called off the search but the families raised funds to keep the search going.

“There’s still that one per cent chance: what if they’re out there alive still?” asked Fraser.

She said the family has received new tips from some claiming they’ve heard the plane, others saying they’ve seen small fires.

They have renewed optimism that the search won’t turn up empty because of specialized equipment they hope can detect the plane.

The family has been working with a B.C. drone operator who has just acquired a special light-weight instrument called a magnetometer, which can be attached to the drone.

“It is a metal detector that you can put into the air,” explained Sean Adams, a co-owner of 3 Points in Space Media Ltd., an aerial surveillance company that specializes in mapping.

Adams believes there are enough metal parts in the plane that the magnetometer should be able to pick it up.

The instrument has traditionally been used in mining to identify mineral deposits and to detect unexploded war bombs, he explained.

The magnetometer attachment was designed by a German company and normally costs $20,000 but the business has lent it to Adams at no cost to help with the search.

He will operate the drone and collect the data; the company has agreed to process the information, allowing it to plot out a map.

He only has the magnetometer until the third week of April, prompting the family to scramble to fundraise.

The family hopes to investigate all leads, but said money is one of the reasons holding them back.

The family is organizing a fundraiser Saturday in hopes to raise at least $10,000.

While the magnetometer was free, Fraser said the cost to hire a private helicopter is nearly $2,000 an hour.

The event is taking place March 17 at the Sportsman’s Pub in Edmonton from 7 to 11 p.m.

Fraser said people who cannot participate in the silent auction in person, can still do so online.