Late Oilers forward Colby Cave to be honoured by family, team in celebration of life 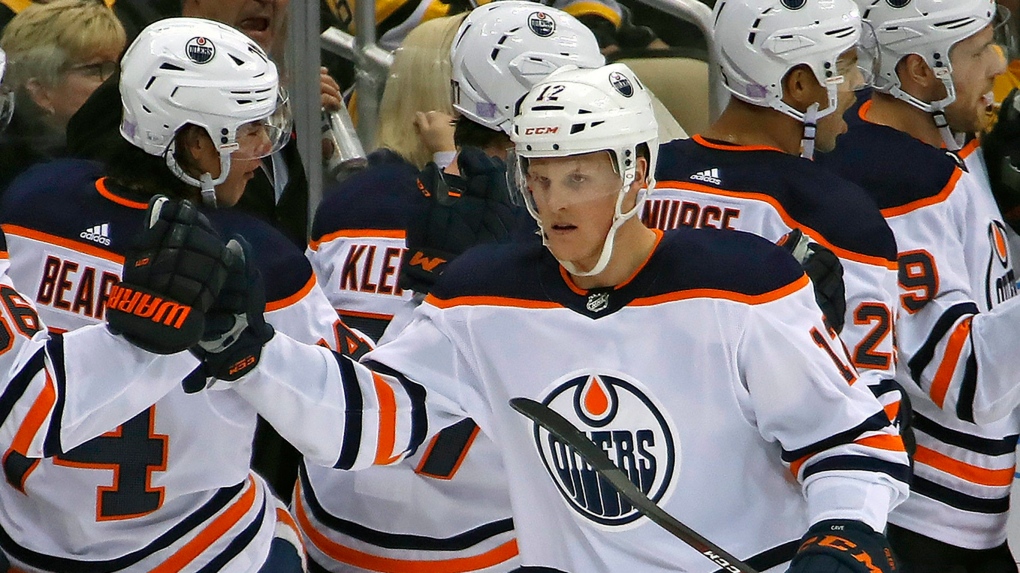 Edmonton Oilers' Colby Cave (12) returns to the bench after scoring during the second period of an NHL hockey game against the Pittsburgh Penguins in Pittsburgh on Nov. 2, 2019. Edmonton Oilers forward Colby Cave died April 11, 2020 after suffering a brain bleed earlier this week. He was 25. THE CANADIAN PRESS/AP/Gene J. Puskar, File

EDMONTON -- Late Edmonton Oilers forward Colby Cave will be honoured in a special celebration of life, hosted by his family and the team at Rogers Place on April 10.

Cave died at the age of 25, after suffering a brain bleed, in April of last year.

"It is hard to believe that it has been almost a year since I lost my best friend and husband. This past year, has been the most difficult year of my life but I thank everyone for your continued love, prayers, and support,” Colby Cave's widow, Emily Cave said in an Oilers news release.

“Since Colb passed, all I wanted as his wife was to give the ceremony he deserved. Although, this is never how I imagined my husband’s Celebration of Life, almost exactly a year later, and still with limited numbers, this will help bring people from all over together (virtually) to remember Colb that weekend.

"I am incredibly grateful, for the Oilers helping me put this together for Colb. He would love people coming together in a COVID safe way and I appreciate all the people that will be joining us virtually on April 10th. Thank you again for the continued prayers, and support. They mean more than you’ll ever know.”

Emily Cave is asking that in lieu of flowers, donations be directed to the Colby Cave Memorial Fund, which helps support community programs with emphases on mental health initiatives, as well as providing access to sports for underprivileged children.

The Edmonton Oilers "2nd Shift program," that was introduced in 2019, will be rebranded to honour Colby Cave's memory and legacy, the Oilers said.

“It is an incredible honour to have established Colby’s Kids with the Oilers," said Emily Cave.

“Our partnership with CASA and the rebrand of the 2nd Shift program means more than words could ever describe. We couldn’t have picked a better fit for two things that were incredibly special to Colb and myself- bringing awareness and support to mental health initiatives and helping underrepresented children.

"I know this is something that Colb would love and be really proud of. I’m looking forward to helping children and their families through many special projects at CASA.

"The hockey community is a special family and being able to provide underrepresented children and their families the ability to be a part of it is incredibly special. I would like to thank everyone from the bottom of my heart who has supported me and donated to Colb’s Memorial Fund this past year. Thank you for helping me continue my husband’s legacy.”

More details on that event are still to come.

The upcoming celebration of life for Colby Cave will be streamed live online, starting at 11 a.m. MT.