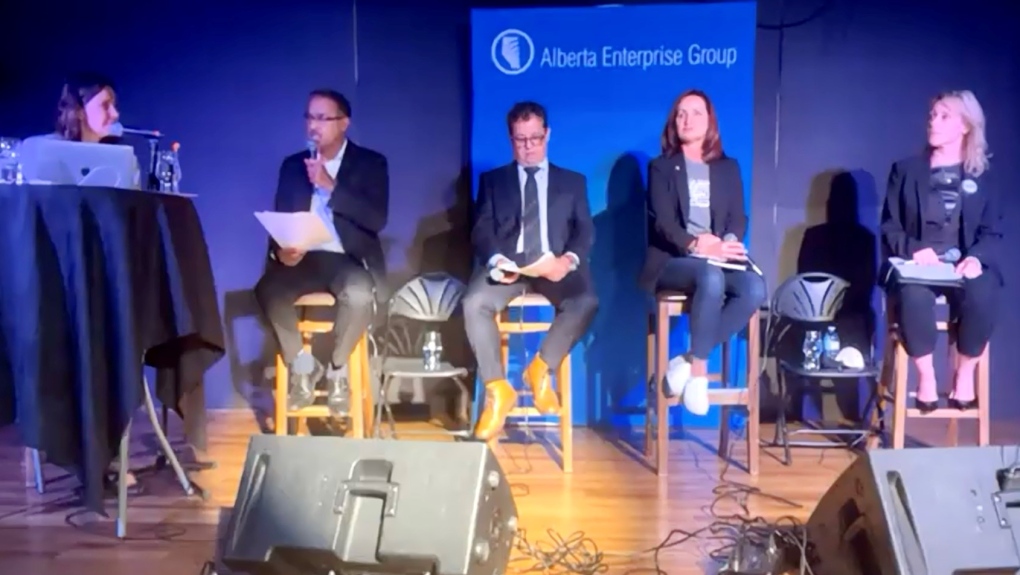 You don’t often hear every candidate in the room agree on a red-hot controversial issue - but it happened Wednesday at a mayoral forum in Edmonton.

The question - mandatory vaccines or daily tests - for City of Edmonton employees.

The candidates - Amarjeet Sohi, Kim Krushell, Michael Oshry and Cheryll Watson - had differing details in their plans, but all agreed to some sort of vaccine requirement for city workers.

All four also teamed up to allege that the UCP government isn’t doing enough to keep Albertans safe - with the province again leading the country in per capita COVID-19 cases.

“I will work with council to require that city employees be vaccinated, if they’re able to do so. I also call upon the provincial government to implement a province-wide vaccination passport immediately,” Sohi said.

“I’m super frustrated with the fact that the province of Alberta has not taken a strong stand on this issue. We need a coordinated approach across this country with the vaccine passports,” Krushell said.

She started her response with a simple “yes” to whether she thinks city employees should be fired if they refuse the vaccine.

“What happened to everybody doing their part to try to protect their neighbour? To try to protect healthcare workers? So, yes, I do think we will have to go in this direction, and it’s truly unfortunate,” she said.

Oshry included residents in his proposal.

“If someone chooses not to be vaccinated, whether it’s a city employee or a citizen of the city, and they want to use a city service in a building or if they want to work for the city, they’re gonna have to get tested everyday at their own expense,” he said.

“We need strong leadership. We can’t try to pay people $100 at a time, we gotta step up and do something,” he urged.

Watson said she’s “pro-vaccine” and “pro-proof of vaccination,” and she was critical of the fact the province has left vaccine requirements up to individual business leaders.

“We have confused citizens, we have confused residents, and not only that we have put the burden of covid decision making, covid impact, directly in the lap of businesses,” she said.

The event was organized by the Alberta Enterprise Group and hosted by former Wildrose Party leader and PC MLA Danielle Smith. It was livestreamed on YouTube.

Smith announced that candidate Mike Nickel was invited, but he declined to attend.

Nickel told CTV News Edmonton that he was not interested in a “paid for access” event, but he will be participating in at least two upcoming forums.

He has previously said he does not support mandatory vaccines for city employees.

Organizers were selling tickets for up to $60. The City of Edmonton has announced there will be no official debates this election.

The forum was held inside a south side pub. None of the four candidates on the stage were wearing masks, nor was the host, but they were asked to mask up before leaving the stage.

The rest of the event focused on business development, tax rates and major projects like the incomplete Ice District and Blatchford redevelopment.

Edmontonians will vote on Oct. 18.

Diana Steele, Rick Comrie, Brian Gregg, Abdul Malik Chukwudi and Augustine Marah are also running for mayor but were not at the forum.