A transformative concept for Edmonton's river valley has reached a new stage in its design process. As the city enters the third phase of public engagement for its Touch the Water promenade, the proposal promises the project will do just that.

It's an idea that's been talked about for nearly 10 years, but according to the project's supervisor for open space planning and design Geoff Smith, plans began in earnest in 2019.

Two years later, the current design concept was developed based on input from Edmontonians during two phases of engagement, the latest happening last fall.

The current design shows the proposed promenade would run along the north shore of the North Saskatchewan River in two sections, totalling four kilometres in length.

"Combined, a single concept plan has been completed for those two areas," Smith told CTV News Edmonton from Walterdale Bridge. 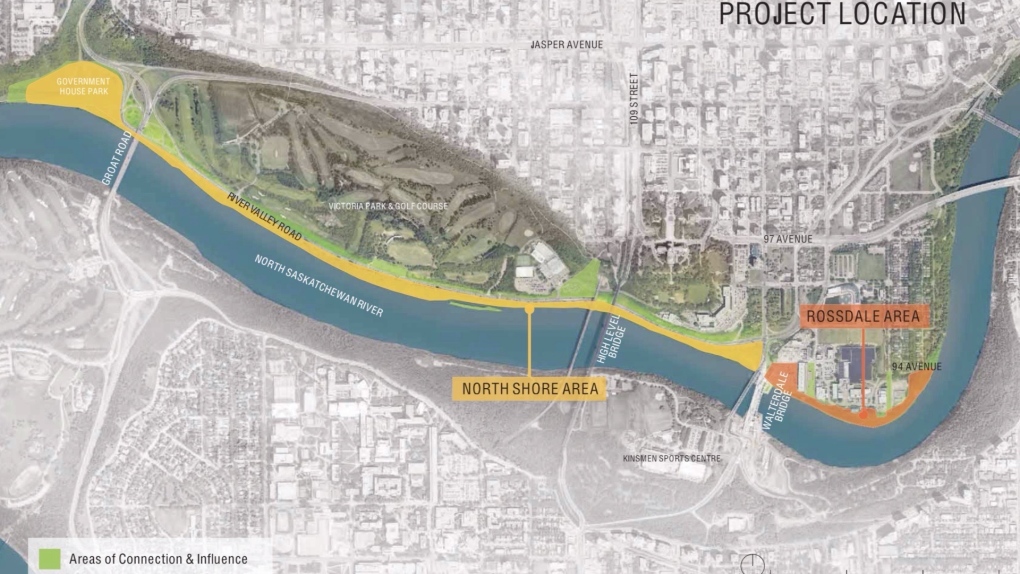 One section, known as the Rossdale Area, would extend from 94 Avenue, near the former Rossdale Power Plant, to Walterdale Bridge,

The other section, known as the North Shore Area, is proposed to run from Government House Park to Walterdale Bridge.

"We're now embarking upon the third phase of engagement for the Rossdale Area only," Smith said.

Starting on Monday, the city is asking people who enjoy the Rossdale area to give their opinions on what they'd like to see in the next stages of design for that section of the proposed promenade.

"This area certainly has been reinvigorated with the Walterdale Bridge and the former power plant is really seen as a central node meeting place that will be central to this project," he said.

"It's really seen as an activity hub, an area that could support some small-scale commercial activities such as cafes and restaurants, coffee shops, some small retail."

Smith pointed out that the current design for the promenade builds on existing infrastructure where Edmontonians are already gathering and meeting.

"Whether it's cycling and walking along the river, crossing the bridge, meeting at the Rossdale Power Plant – those enhancements would allow for more people to attend and enjoy the area."

FUNDING FOR CONSTRUCTION NOT YET APPROVED

The project is funded for planning and design, said Smith, and that work will be completed by the fall.

And while funding has yet to be approved for construction, Smith noted that it's anticipated the promenade would be built in phases over a number of years.

"In order to identify what the prioritized areas will be," he said, "we'll have to work with council and seek guidance from council through budget sessions."

According to Smith, Edmontonians will get a better idea of cost estimates during the next level of detailed design.

You can participate in the city's third phase of public engagement online, from July 19 to Aug. 3.