Nearly two months after the launch of a city pilot project meant Edmontonians could legally enjoy an adult beverage in designated park sites, one Edmonton man is worried the move may have also created some unintended consequences.

On May 28, Ward 3 Coun. Jon Dziadyk celebrated the new city bylaw, that was created from his own motion, by taking a swig from a can of beer at Rundle Park.

"Cheers to summer, and a little bit of freedom," Dziadyk declared.

Now, thanks to the appearance of some new signs, that "freedom" seems to be in question.

As part of the city's pilot project, large signs indicating that public alcohol consumption is not allowed have been setup in several Edmonton parks, including Ezio Faraone and Walterdale Hill. 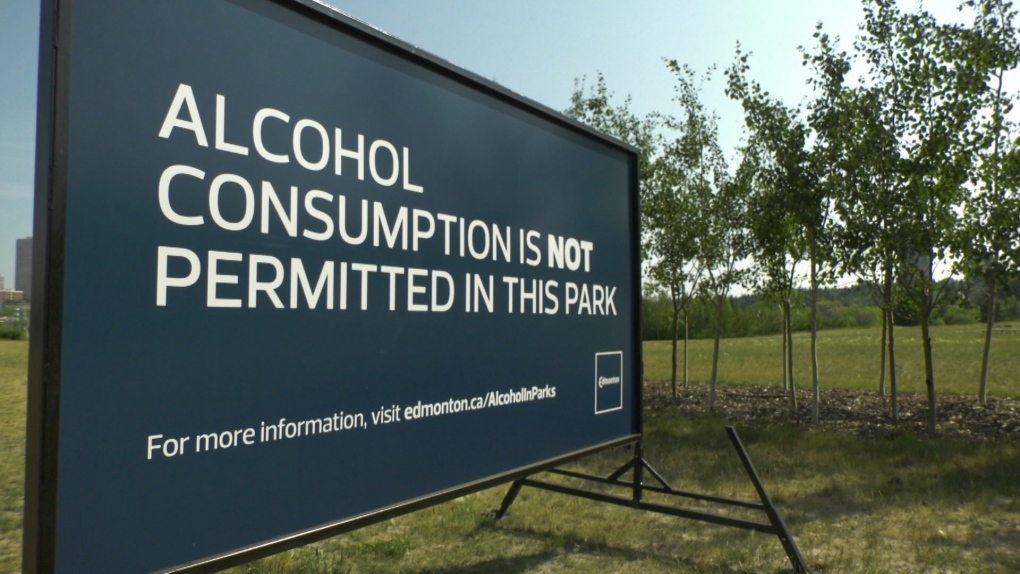 "There's something about them that's sort of just unpleasant to be around, even if you don't happen to be here while having a drink," said Sedgwick. "They just seem kind of like you're being watched."

If you ask the city councillor who played a large role in creating the pilot, he would tend to agree.

"These larger signs indicating that parks are dry, to me, is a little bit of overkill because we know that parks are supposed to be dry," Dziadyk told CTV News Edmonton.

"I'd rather see enforcement done through bylaw officers approaching people that may be breaking the law."

'FOR THE AWARENESS OF PARK PATRONS'

In a written response to CTV News Edmonton, the city said the focus of the pilot has been on public education.

"As part of that education process we have deployed three signs to parks that are not part of the pilot for the awareness of park patrons," the statement read in part. "The signs will be rotated to new locations as required until the end of the pilot on October 11, 2021."

A spokesperson for the city told CTV News Edmonton there have been 692 warnings and 31 tickets issued for various infractions related to consumption of alcohol in city parks, from the start of the pilot to the end of June.

In Alberta, a person who is found consuming alcohol in public, or publicly intoxicated can be fined $120.

'THERE WAS ALMOST A STATE OF DECRIMINALIZATION'

According to Sedgwick, before the new law came into effect there was an unwritten one in Edmonton.

"There was almost a state of decriminalization when it came to drinking in parks," he said. "People would come out here and have a drink with a picnic and have a beer and there was mostly a blind eye turned to it, but now it seems like, because legalization occurred in some public parks, there's increased enforcement at other parks."

Until recently, Walterdale Hill has been the kind of public space that #yeg always needed but never had. These rules make no sense, especially compared to the rules for cannabis. @CityofEdmonton and #yegcc, please fix this. #ParksForThePeople https://t.co/mzX28mrxXK

Dziadyk said while drinking in public parks has always happened, the benefit of the pilot is it can now be regulated.

"The beauty of the pilot project is that it allows an activity that's been occurring to be permitted under certain circumstances. That's better public policy because we channel this activity where we can enforce the rules and standards and expectations.

"The fact that people have always been drinking in parks isn't really a reason for them to continue drinking in parks. What the city has actually done is clarified the rules, allowed this activity, but segregated it so that people can enjoy other park spaces with their families."

While Sedgwick had high hopes for Dziadyk's public alcohol consumption bylaw in the beginning, needless to say, he now has reservations.

"I think it should be legal," he said. "I just don't think that anyone voting for legalized drinking in parks expected this.”