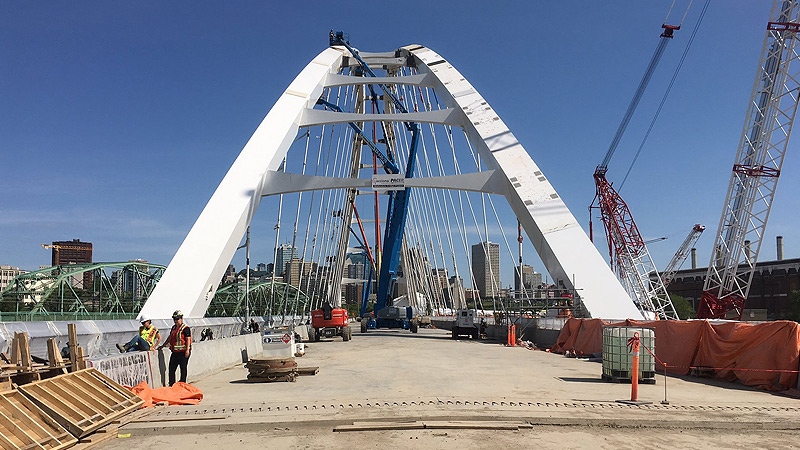 Construction on the new Walterdale Bridge in Edmonton's river valley continued Thursday, June 8, 2017, as seen during a media tour of the construction site.

After a two-year delay, the new Walterdale Bridge is set to open to traffic on Monday.

The City of Edmonton said two of the three lanes will open to accommodate the remaining work on the north side of the bridge, which will not be done until the old bridge closes.

All three lanes — and the new west sidewalk — will be open in October, the city said.

"Certainly it’s a good milestone for this project to be open and for commuters to have a slightly more direct access into downtown with this new and beautiful bridge," Mayor Don Iveson said Sunday afternoon.

The shared-use path and some surrounding trails will open later in the fall. The city asks pedestrians to follow trail detour signs in the area.

The access road out of the Kinsmen Sports Centre to the new bridge will be completed in 2018, the city said.

"We’ve held the contractor accountable all the way along with fairly significant penalties, which has motivated them to get the bridge open finally," Iveson said.

Iveson also said the bridge will be under budget due to the penalties the contractor has to pay.