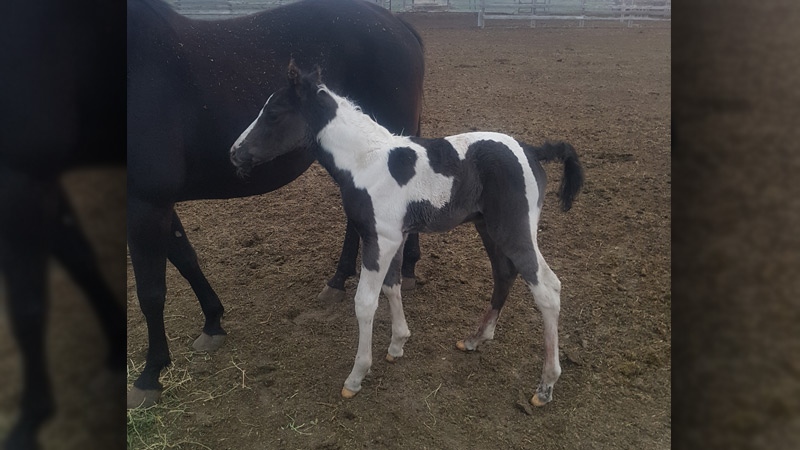 This foal was stolen from a rural property northeast of Welling, Alberta. Supplied

A foal born just two days ago was taken by thieves and then found dead hours later, RCMP said.

The horse was discovered Wednesday afternoon about half a kilometre away from the owners’ home.

“It is very sad. It is disheartening,” Bev Kultgen said. “I think it is 11 months that [horses are] pregnant, and then they have their baby and then this happens.”

The Kultgens’ acreage is northeast of Welling, which is about half an hour south of Lethbridge.

Russ Kultgen said the newborn horse was in the corral with his mother Tuesday night and was gone the next morning.

“There’s no way it could’ve walked away. It’s only two days old, it was wobbly and everything,” Russ said.

Bev said the family had driven around the area multiple times and never saw the foal, so she is suspicious about how the animal turned up.

Before the foal’s body was found, Russ said he is worried the foal might die if he isn’t fed properly, adding he requires milk from a mare or milk replacement for horses.

“There are places that sell [milk replacement]. But I phoned them all and no one’s come in to buy any.”

Kultgen, who’s been raising horses for more than seven decades, estimates the foal could fetch between $800 and $1,000.

“He is a pretty thing. He is black and white, and everyone wants a black and white…you don’t find too many of them and the ones you do find are expensive.”

RCMP said it doesn’t appear like the horse was taken by animal predators.

“There’s no physical evidence at the scene that suggests to me this was an animal attack: there’s no hair, no blood, there’s nothing to suggest a struggle of any kind,” he said.

Raymond RCMP continue to investigate and are asking anyone with information to contact them at 403-752-4747. Anonymous tips can be submitted to Crime Stoppers at 1-800-222-8477 or online.