'Not a hard ask': Mom of teenager killed in Leduc school stabbing wants teachers to have first aid

The mother of a 17-year-old girl who was stabbed in a Leduc classroom, and later died from her injuries, last March says all teachers should complete first aid training.

On March 15, 2021, police locked down the area near Christ the King High School as officers searched for the person who stabbed Jenny Winkler. Hours later, RCMP arrested 19-year-old Dylan Thomas Poutney, charging him with first-degree murder.

Louise Molenkamp, Winkler's mother, told CTV News Edmonton that she asked first responders how much first aid her daughter got after being stabbed three times in the neck area.

"We were actually told by the first responder it was a little over three minutes before he could get to her," Molenkamp said.

"The response from the school was only a handful of teachers in any school have to have first aid," she said. "That doesn't work in a lockdown. From what I've been told and from her friends, you're stuck in that room. Nobody can leave. No one can come in." 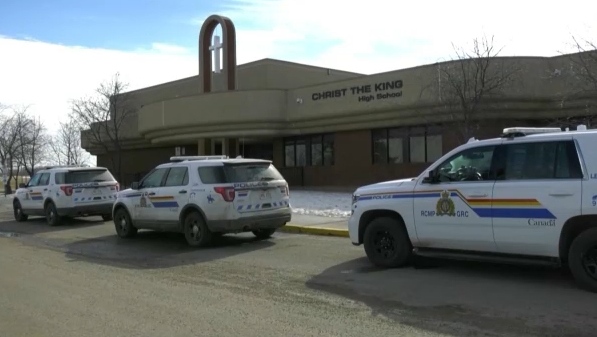 While Molenkamp does not know if her daughter's teacher knew first aid, she believes those three minutes were critical and that first aid may have stabilized her daughter's deteriorating condition.

"I was shocked," Molenkamp added. "It's taken me this long to finally work up the nerve to do something like this."

"I think anybody who is watching your child for a lengthy period of time, I mean these children are in the school six to seven hours a day," she said. "Every teacher should have it (first aid)."

RCMP has previously only said that Pountney and Winkler were known to each other and that he was in her class.

"We grew up two doors down from him in Leduc here," Molenkamp said. "He was best buds with my son.

Molenkamp is now petitioning to make first aid a requirement for all teachers.

"I think this is a no-brainer," she said. "I mean, you're with other people's children. You should know at least the basics."

Jason Schilling, Alberta Teachers' Association president, said in a statement to CTV News Edmonton that the association supports the idea, but the direction would need to come from the province or school boards.

"Delivery of first aid training would come with cost and time demands that would need to be resolved," Schilling said.

Education Minister Adriana LaGrange said in a statement that it is "imperative" students feel safe in schools but that school authorities hold the power to require first aid training for teachers and staff.

"Currently, the decision on whether to require first aid training for teachers is the responsibility of the school authority," LaGrange said. "The government continues to communicate with school authorities on needs related to school safety.”

For Molenkamp, the petition represents a way to channel her grief and anger so that what happened to her daughter never happens again.

"What bothers me the most is, mentally right now, is having that vision of her laying there and nobody's helping her," Molenkamp said.

"Like what did that feel like for her," she added. "(Mandating first aid) it's not a hard ask."