Ice District's future in downtown Edmonton became clearer Friday as new details emerged about an urban village that could be built north of Rogers Place.

The real estate arm of the Katz Group – which owns the Edmonton Oilers – submitted designs of Village at Ice District for council approval and public input.

The plan includes 2,500 residential units in towers up to 25 storeys with businesses on the ground floors, bike-friendly streets, and a public park.

"(It will feature) public green spaces, restaurants, retailers, and high-rise and medium-rise buildings that transition in height to the existing community to the north."

The area – mostly gravel parking lots now – will need to be rezoned, and the Katz Group is negotiating to buy a church that currently sits there.

"It’s wild that there’s that much undeveloped land right in that area," said downtown councillor Anne Stevenson. She likes the plans. 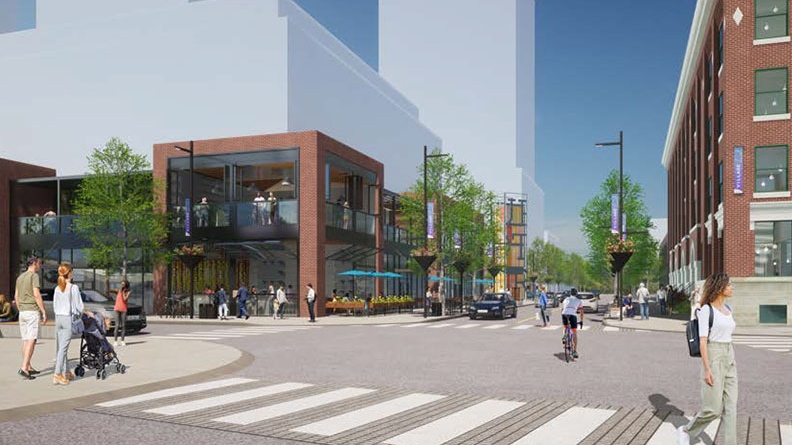 A rendering of the Village at Ice District. (Source: City of Edmonton)

The proposal has received a thumbs up from the city’s design committee, and residents can provide input until April 24.

"We want to make sure that our planning analysis is complete and we’re not missing anything," said Andrew McLellan, a planner with the City of Edmonton.

"Sometimes the local knowledge of people that live nearby, or have lived in areas for a very long time is very valuable."

A rendering of the Village at Ice District. (Source: City of Edmonton)

The president of the local community league said most residents he’s spoken with like the design, at least more than they like gravel parking lots.

"What we’re trying to do is create an urban village down there, which has everything. Jobs, culture, schools, everything is around it. The only thing that’s missing are people," said Warren Champion.

Rezoning is the first hurdle in a lengthy process to make the designs a reality. If city council approves that, the urban village will be built in phases over the course of about 15 years.

Experts say Canada's plan to increase immigration may ease some pressures in the labour market, but bigger changes are needed to ensure new permanent residents are matched with the jobs that most need filling.

An Alberta First Nation is to sign an agreement today with Ottawa giving it the autonomy to administer its child welfare.

Health Canada is encouraging Canadians to check their cupboards and kitchen tables as the agency has recalled more than 30 types of Indigo-branded items including ceramic mugs, mug ornaments and houseware products due to potential mould contamination.

Radioactive capsule that fell off truck found in Australia

Authorities in Western Australia on Wednesday recovered a tiny but dangerous radioactive capsule that fell off a truck while being transported along a 1,400-kilometre Outback highway last month in what an official said was like finding the needle in the haystack.

Fear of disappointment? This is why you should say 'no' more

Many people have a hard time saying 'no,' a psychologist says, but the reluctance to let others down has widespread mental health impacts.

'We're all Tyre': Family prepares to lay Nichols to rest

The family of Tyre Nichols plans to lay him to rest on Wednesday, three weeks after he died following a brutal beating by Memphis police after a traffic stop.

Nearly 130,000 Helly Hansen sweaters and hoodies have been recalled in Canada due to flammability concerns.

Andrew Tate lost his appeal at a Romanian court and will be held for a further 30 days, an official said Wednesday.