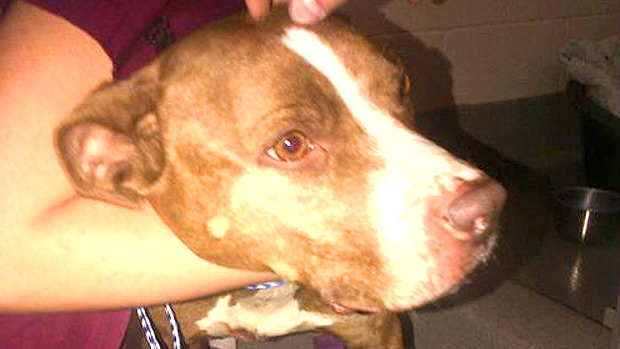 Edmonton Police distributed this photo of a female pit bull, who investigators believe was seriously injured when it was dragged behind a truck in the area of 114 Ave. and 92 St. Tuesday, April 23. Supplied.

While officers investigate an alleged case of animal cruelty from earlier this week, police are working on a fund to help cover the thousands of dollars’ worth in surgery the dog injured in the incident had to undergo.

The investigation started Tuesday, after witnesses called police – reporting a dog was being dragged behind a pickup truck in a north Edmonton neighbourhood.

Police were called at about 12:30 p.m., to the area of 92 Street and 114 Avenue – but the vehicle and the dog had fled before officers arrived.

Investigators checked emergency vet clinics throughout the city as part of their investigation, and found a dog matching the description given by witnesses – the female pit bull sustained a number of injuries to its skin and feet, but was being treated and is expected to survive.

While investigators continue interviewing witnesses and others potentially connected to the incident, police have also turned their attention to helping the injured dog.

Police told CTV News the total costs of the dog’s surgeries could be as high as $10,000 – and a spokesperson said the Edmonton Police Service is in the process of setting up a fund to allow the public to help cover the charges.

More details on how the public can help out are expected to be released Friday.