EDMONTON -- It may have taken 56 years, but a popular Calgary-based drive-in burger and milkshake restaurant has finally opened in Edmonton.

Calgary-based Peters’ Drive-In, which first opened in 1964, opened a second location in Red Deer in 2015. Now, a third restaurant has opened its doors — or at least, drive-thru — in the provincial capital.

"It's amazing…. it’s the greatest thing ever,” said one drive-thru motorist. “We'll come here every day,” added another passenger.

Gus Pieters' retro drive-in has been a hot spot for burger and shake lovers for more than 50 years.

With a menu that boasts everything from triple cheesburgers to bubble gum-flavoured milkshakes, many Edmontonians finally got long-awaited take-out from the newest Peters’ location on Wednesday.

"A single cheeseburger and a black licorice milkshake,” one woman told CTV after she placed her order. 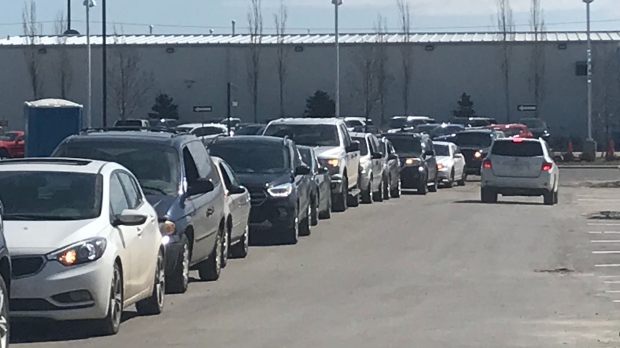 Edmontonians have waited a long time for to see a Peters’ pop up in their neck of the woods. That was evident when the lunch rush lineup on Wednesday stretched 25 cars long, at times backing up past the entrance and pouring onto Gateway Boulevard.

“We've been here maybe like 20 minutes,” said another hungry motorist, “It’s pretty bad but hey, it's worth the wait.”

The Edmonton location, at 5151 Calgary Trail, will be open from 10 a.m. to 10 p.m. seven days a week, but is open for drive-thru orders only due to the COVID-19 pandemic.