EDMONTON -- More than 100 people attended an "End the Lockdown" protest at the Alberta legislature in Edmonton Wednesday.

The crowd gathered outside of the building to demand the province increase the limit on gathering restrictions, reopen playgrounds and provincial parks and reopen restaurants at 50 per cent capacity.

Organizer Michael Banner previously told CTV News Edmonton he wanted Alberta to test the approach for two weeks and then reassess whether it's working.

Chants of "Trump!" broke out after on attendee arrived with a flag depicting the U.S. president, while another person was seen holding an upside-down Canadian flag. 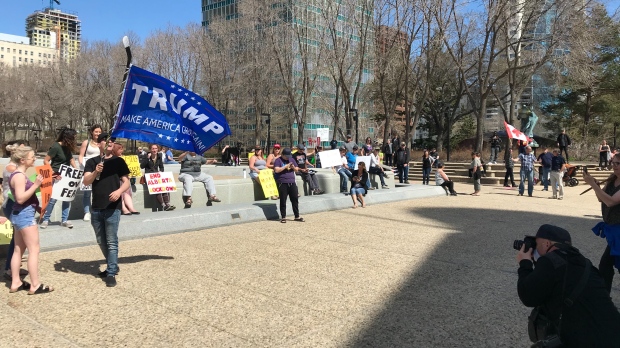 At least two dozen vehicles took part in a parade prior to the protest, with the group United We Roll taking part.

The protest remained peaceful but some participants did not appear to be abiding by two-metre physical distancing orders.

One man came out to counter-protest.

"This is the stupidest thing I've ever seen in my life. You're protesting a virus... like what? These people are giving us a reason to extend this lockdown, not end it."

Edmonton police previously said while the pandemic creates unique challenges, "all people have the right to peaceful assembly" in Canada.

Sheriffs and police were also on hand to monitor the protest and communicate with rally leaders, before ordering people to leave the grounds.

Despite some sticking around to protest government leadership at both the federal and provincial levels, they eventually cleared out with no arrests made, or fines issued.