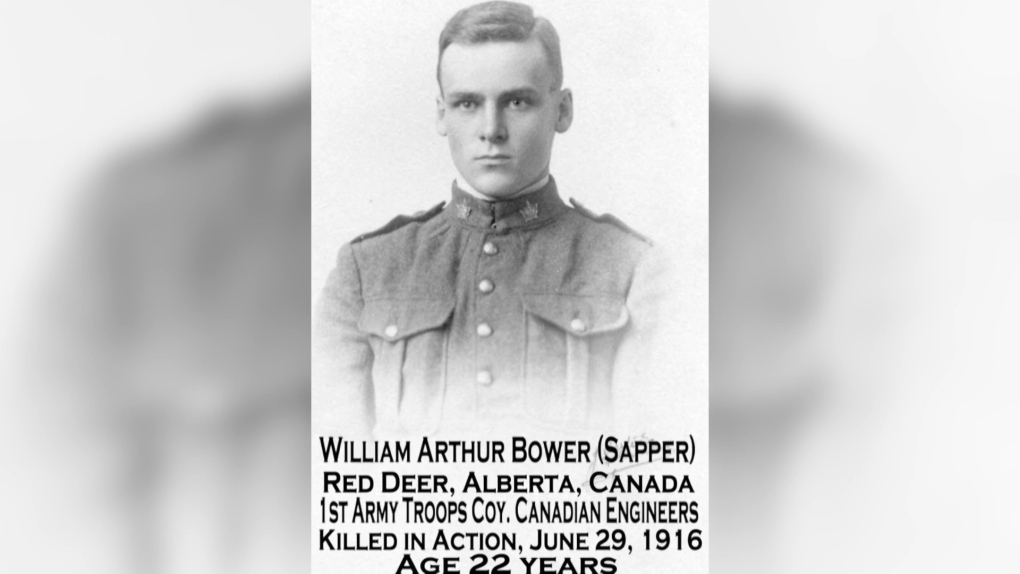 Starting next year, Red Deer high school students will be able to apply for a new scholarship that honours the memory of a man who fought and died in the First World War.

William Arthur Bower was born in 1893 and was the son of James and Catherine McLean Bower.

They established the famous Bower Family Farm in Red Deer which still exists to this day.

After graduating high school in Red Deer, Arthur joined the Canadian Armed Forces prior to conscription.

Arthur served as a sapper: a military engineer who dug trenches.

During his service, Arthur’s tasks would have included building roads, bridges, field fortifications, and laying and removing demolition charges and mines.

Arthur died in combat at the age of 22.

Now his nieces, Ruth and Dorothy Bower, aged 87 and 97 respectively, have donated $1 million to the Red Deer & District Community Foundation to create the William Arthur Memorial Bursary Fund to honour their uncle’s memory.

“They felt it was important to remember their uncle as they were lucky enough to live to be in their late 90’s, and he died so young,” said Rob Porkka, the Bower Family Spokesperson.

“When you have your name attached to a scholarship, the winners, in particular, will think about that person and find out a little information about them.”

A minimum of $5,000 will be awarded to five students each year and can be renewed annually.

This means a student attending a four year program could receive a minimum of $20,000 over four years.

The scholarship is open to any Grade 12 student who has graduated from a Red Deer high school and plans to attend a post-secondary institution in Canada.

“I think it’s great for young students to reflect a little bit on the lives of soldiers who were killed in action as they try to fulfill their dreams in post-secondary education,” said Porkka.

Lindsay Thurber High School’s Student Body President Elena Bakker said she is grateful for the opportunity this will provide to future graduates.

“I think this is a sort of thing that’s really going to change lives,” said Bakker.

“It’s really generous of them [Ruth and Dorothy Bower], and I think it’s a wonderful way to honour William Arthur Bower’s legacy. They must be wonderful women to help students our age get a better education.”

Porkka said the Bower’s want the scholarship to honour the legacy of their uncle and other fallen soldiers.

“William Arthur Bower thought that in order for us to live in a free and caring society, he would have to step up, and so hopefully that’s the message to students, whether it’s in war time or in their career, they need to step up and try their best.”

Applications will be accepted beginning in January 2022, with the first five scholarships awarded in June 2022.

NATO Secretary General Jens Stoltenberg says Canada is “one of the lead countries in NATO” in its support for Ukraine, as the country faces a possible Russian invasion.