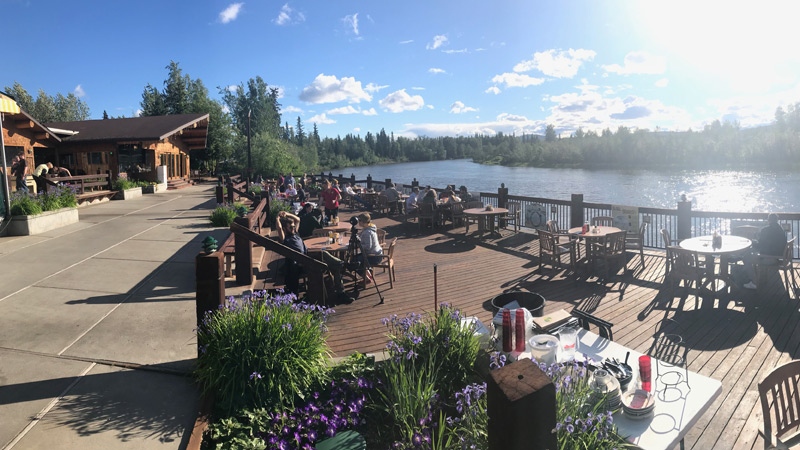 We were looking forward to this day. This is the first day that wouldn't involve 8+ hours of driving. We had 2 interviews in Fairbanks. The first one was at 10 a.m. at the Fort Wainwright U.S. Armybase. First, we had a buffet breakfast at the hotel. The place was PACKED with bus tourists waiting to depart for the day, likely to nearby Denali. Our server was a young man whose nametag read 'Petar'. His accent wasn't North American. Turns out Petar is from Bulgaria and living in Fairbanks with a bunch of other Bulgarians on a 4-month work/travel program. He goes to school in Bulgaria in some sort of cooking/culinary program with dreams of opening a restaurant there someday. Nice guy.

We grabbed our luggage and went to check out. Dave is ahead of me as I stopped at the front desk. I walked out to the parking lot and Dave said: "Check this out." This is what I saw: 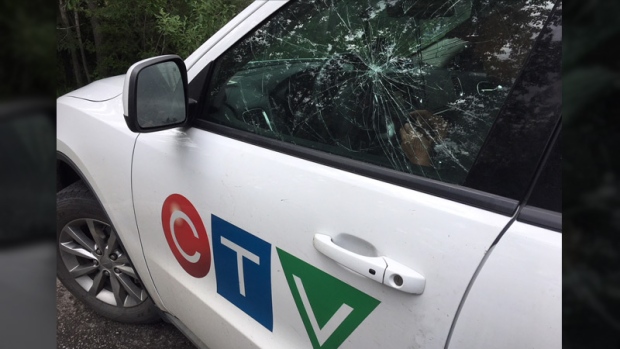 Yup. Someone had tried to break-in to the CTV-mobile. Thankfully, they were not successful and the laminated glass was still intact. Disappointing for sure, but not much you can do. We started googling glass places but also had an interview to get to.

We drove the 3 minutes to the Fort Wainwright Visitor's Centre where we were met by a Public Affairs officer named Brady. He expressed apologies for our glass situation and we got in his truck and entered the base. Soon we would meet Mike Ferguson, a retired air force colonel, who is an expert on all things Ladd Field, the Northwest Staging Route and its strong connections to Edmonton.

After the interview, Brady let us get a few shots of Ladd. Fridays apparently aren't busy days he said, but we still managed to see an Apache Helicopter take off. Brady dropped us back at our vehicle and with a few hours until our next interview, we were on the hunt for glass repair.

After calling a few places, it was evident we wouldn't be getting a repair, mainly because no one had the glass for the driver's side door for a 2016 Dodge Durango. But one of the glass guys took a look and assured us we'd be okay to drive with it.

We then went to check out Eielson Air Force base as Dave wanted to get some still pics of American fighter planes (F16 & F15). From there we moved into downtown Fairbanks and found a milepost marking the 'unofficial' end of the Alaska Highway, nearly 3000 km from Edmonton where we'd began our journey. This was located in Golden Heart Plaza which overlooked the Chena River and had a gorgeous statue and fountain recognizing the history of dogsledding and pioneers who came to Alaska. It was the first spot we found that really looked like something locals could be proud of. 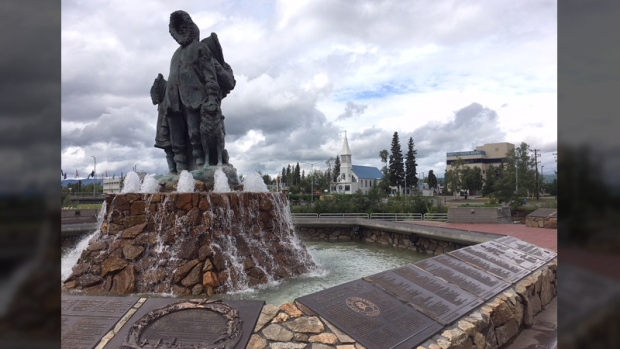 From there we went to the Alyeska Pipeline Visitor's Centre near Fox (about 15 mins north of Fairbanks) for an interview with an engineer with the Alyeska Pipeline Company. The company operates and maintains the Trans-Alaska Pipeline on behalf of 4 different shareholders including Exxon and BP. Its 800 miles long and transports oil from Prudhoe Bay to Valdez on the southern coast of Alaska. It was built in the 70s and is considered an economic driver of Alaska (see where we're going with this?). It has also had some spills over the decades, some deliberate (vandals, a hunter successfully pierced it with a rifle in 2001) and accidental (see Valdez in 1989). Also talked to some locals who say not everyone's on board with the pipeline, but by and large, Alaskans are proud of it.

After this, Dave and I felt it was time we ate dinner at a normal hour, so we went to a place called Labelle's Bistro in downtown Fairbanks. Great food and service. I had the meatloaf. From there, Dave and I went to check out a place called Pike's Landing, a restaurant with a huge patio overlooking the Chena River. There was one space reserved for what appeared to be a 20-year high school reunion. After we failed pretending to be old classmates (just kidding), we got a table right next to the water. You can even buy and hit golf balls, aiming for a big "LOVE ALASKA" lettering across the river. My terrible golf game was on display for all! I shanked a few...but I think I had the best shot. I'd say Dave was more consistent. The best part was the direct sunshine which was beaming over Fairbanks well after we packed it in at 10:30 or so. 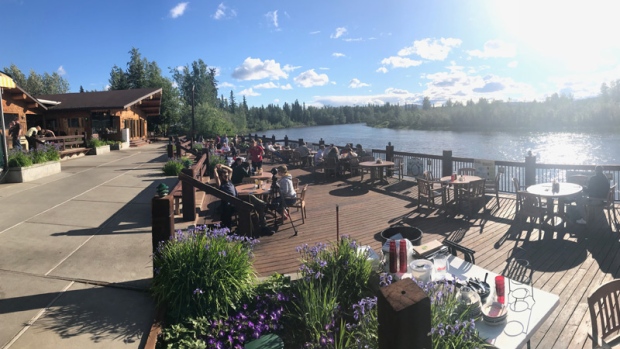