Signs of autism can be detected in infants: U of A researchers 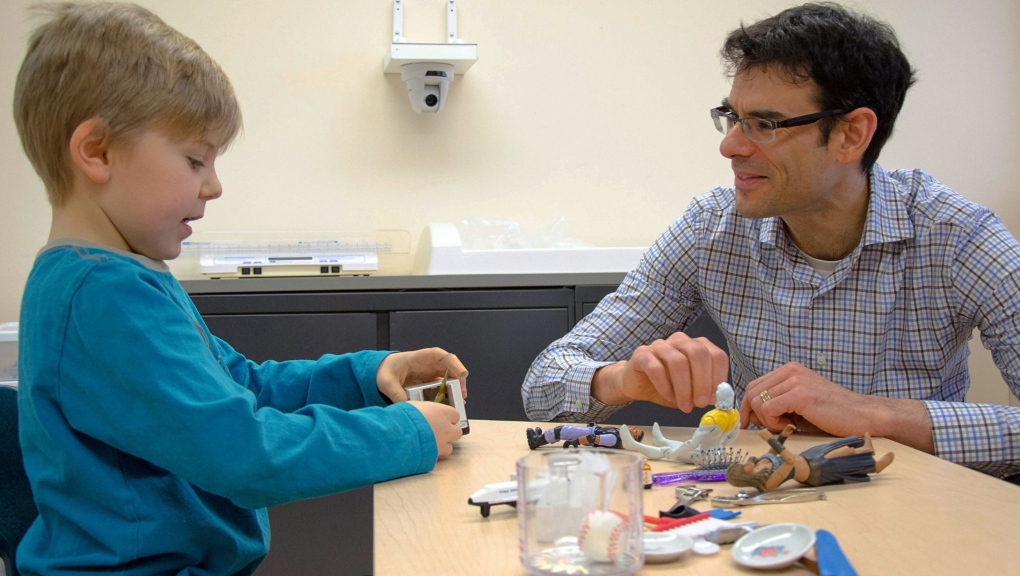 Lonnie Zwaigenbaum conducts a study with a young patient. Zwaigenbaum led new research showing that autism spectrum disorder can be predicted in at-risk children as young as a year old, which could lead to earlier interventions and better outcomes. (Photo: Alberta Health Services; taken pre-COVID-19)

EDMONTON -- Early intervention can greatly improve outcomes for children with autism, and researchers at the University of Alberta have successfully predicted diagnoses using signs detected in infants as young as 12 months old.

"What we found is that even at six months there were some subtle differences," principal investigator and pediatrician Dr. Lonnie Zwaigenbaum told CTV News Edmonton. "Differences in early motor development like reduced muscle tone, that actually identified infants at risk."

Autism spectrum disorder affects roughly one in 66 Canadians and is normally diagnosed when children are four or five years old. An earlier diagnosis means quicker access to intensive behavioural and education interventions, which could be life changing for children and their families.

Zwaigenbaum, who is also director of the Autism Research Centre at the University of Alberta and holds the Stollery Children’s Hospital Foundation Chair in Autism Research, said the research supports what parents have been telling doctors for years.

“By a year of age, we see a range of behaviours that really do map onto what we are looking for in older children, such as not responding when their name is called, not looking the parent in the eye, not smiling and engaging with parents and other people,” he said.

A total of 681 babies were included in the study, 500 of whom were younger siblings of children with autism spectrum disorder and considered high risk.

The researchers measured a broad range of behaviours and motor control in the infants at six, nine, 12, 15 and 18 months old. They were assessed at two and three years old.

More than half of the children who were diagnosed with autism by age three, 52 per cent, had shown early behavioural signs at 12 months.

"We're hopeful that by identifying these early signs and getting some intervention started, that we might be able to lessen the impact of Autism in the long run and certainly avoid parents feeling the frustration of being on the sidelines," Dr. Zwaigenbaum said.

The researchers plan to test the tool in the general population and share their findings with other pediatricians.

Early interventions include coaching parents to help with their child's development and learning through play and social connections.