A trio of local musicians is hosting their first music camp, allowing other young people to hone skills and confidence, while their own star continues to rise on the world stage.

The Melisizwe Brothers can count appearances on the Ellen Degeneres and Steve Harvey talk shows among their recent international stages, and this week they’re hoping to inspire others to follow their lead. The Gold Mind summer music camp was an idea the boys came up with, inspired by an gift they received 10 years ago.

“It was a friend of ours, of our mother’s, that actually gave us an electronic keyboard. We started to use it and we got invested in music and it was because of that gift that we really learned to love music.”

That spark lead them to grow their skills, and record a cover song by The Jackson 5. The tune, posted on Facebook, became a viral hit. Seth explains, “So when Ellen caught onto that and we went on and performed the same song, I’ll Be There, and you know the rest is history.” 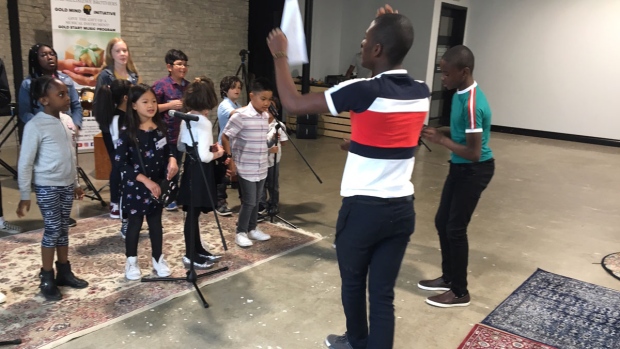 This week, thirty students from age 5 to 24 years old will attend sessions in downtown Edmonton. Middle brother Seth, 13, says they want to give young people the tools they need to succeed.

“Kids just come in and they learn music, we give them courage and we tell them how to use the stage, just like how we use the stage. So it’s kind of hope for them.”

Nine-year-old Andrew Mosonyi is enjoying the camp and the chance to play his guitar and recorder for an audience.

“I encourage other people to come," he says. But his aspirations are even more diverse. “When I grow up, I’m thinking about being a soccer champion. Like maybe going to the Olympics.” 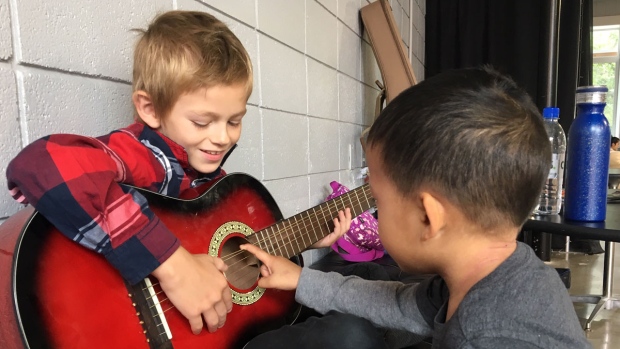 Those goals, even beyond musical aspirations, are at the root of what the brothers are trying to achieve. A namesake song, Gold Mind, written by the brothers and sung at the workshop, reinforces the idea, says 12-year-old Zachary Melisizwe. “The song really talks about that you have something special and that everybody has a gold mind. Ours is music and yours can be different things as well.”

The camp costs $250 but the brothers want to make it accessible, so they have waived the fee for some students without the means to attend. That generosity is also reflected in donation of the camp performance space by The Foundry Room in the Oliver Exchange building and musical instruments for those unable to purchase the tools needed to build on their talents.

Plans are already being made to expand the summer music camp.

The Melisizwe Brothers are continuing to work on their musical careers, with their largest ever Edmonton performance planned for Nov. 11 at the Jubilee Auditorium. “We just want to go for bigger events and just travel the world and just have fun with it, right?”

Anyone wishing to donate a musical instrument to the project can contact the brothers through their website.