'The only queen I knew': Albertans remember Queen Elizabeth II at memorial service

'The only queen I knew': Albertans remember Queen Elizabeth II at memorial service

Alberta paid tribute to Queen Elizabeth II on Monday with a memorial at the provincial legislature, which the late monarch visited the last time she was in the province.

As the funeral service for the Queen at St George's Chapel at Windsor Castle was wrapping up in England, a few hundred people gathered in downtown Edmonton for an hour-long program that included an official party entrance by Pipe Major James Perry, the national and royal anthems by Edmonton's Greenwood Singers and the Royal Canadian Artillery Band, and a 96-gun salute.

"It's the end of a very significant part of history, one that spanned multi-generations," one attendee said of why they were participating.

Another told CTV News Edmonton they were grateful the Alberta government organized the event, as they couldn't travel to London.

Elder Bert Auger led the service with a smudging and a blessing in Cree and English.

Later in the program, following a minute of silence, Lt.-Gov. Salma Lakhani spoke of Queen Elizabeth's "unifying role" across the commonwealth.

"Though you are no longer with us physically, your extraordinary legacy will continue to shine through in our communities and inspire a people mourning your loss. We are eternally thankful for all that you gave in the course of a long, storied and most beautiful life of heartful service." 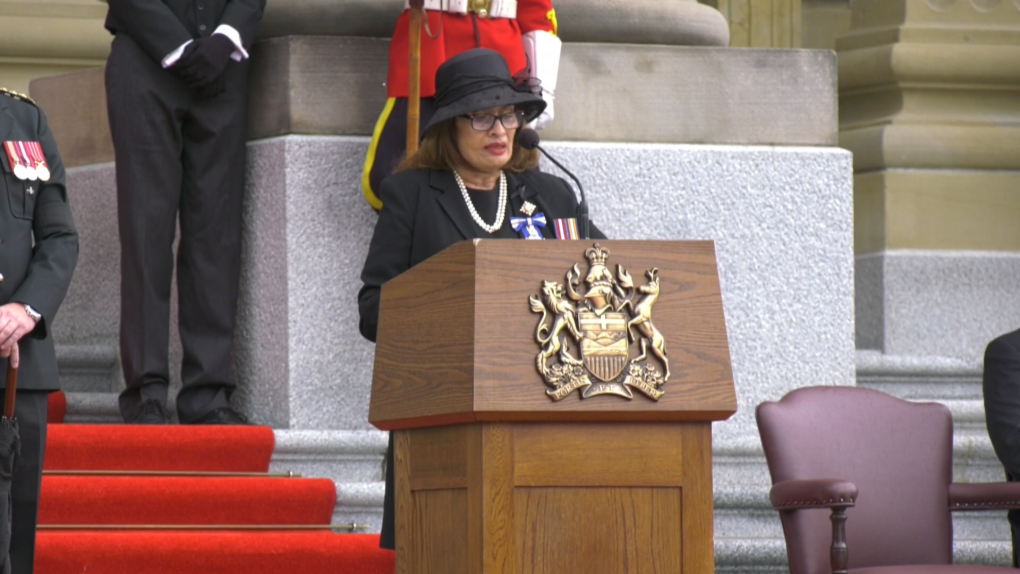 Alberta Lt.-Gov. Salma Lakhani speaks at a memorial for Queen Elizabeth II at the provincial legislature on Sept. 19, 2022.

During his own remarks, Alberta Premier Jason Kenney, who waited in England to see the Queen lying in-state, called the grief seen across the globe "astonishing" and symbolic of the greatness with which the late monarch reigned.

"She bridged a century that characterized exponentially more change than any other in human history. She did so with wisdom and dignity," he commented.

"Here in Alberta she will be remembered forever in schools, in roadways, in mountains, in the newly renamed Queen Elizabeth II building behind us," he added, referencing the renaming of Edmonton's Federal Building. "But the way we can most intimately memoralize her is to find small ways, each of in our own lives, to emulate those virtues she personified: of duty, of honour, of dignity, and of service to others." 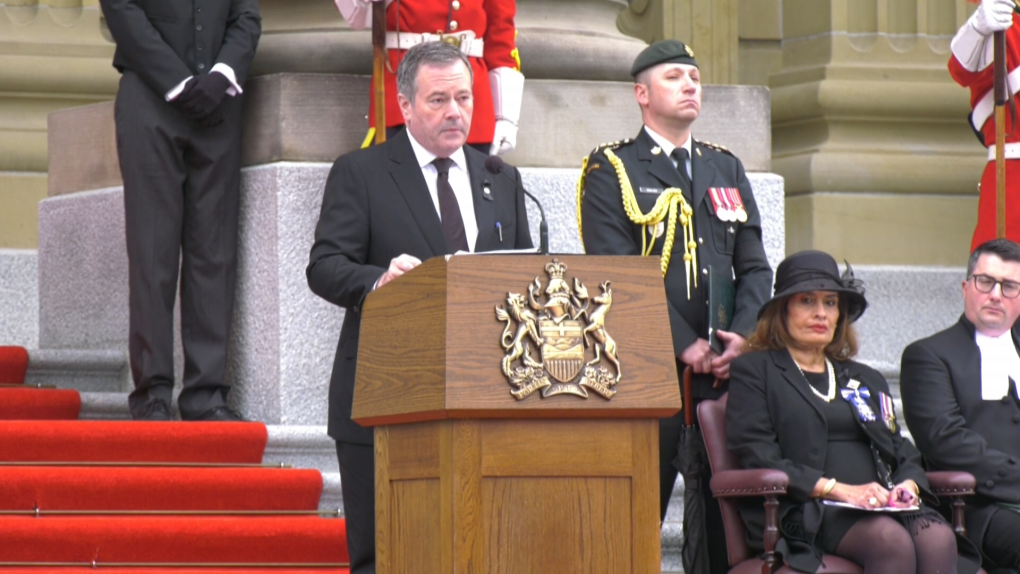 Alberta Premier Jason Kenney speaks at a memorial for Queen Elizabeth II at the provincial legislature on Sept. 19, 2022.

The speaker of Alberta's legislative assembly noted thousands of Albertans wrote or sent their condolences to the Royal Family. Nathan Cooper called the late queen a constant in Albertans' lives.

"Your first memories and perhaps the most meaningful memories you have of Her late Majesty may have been from right here at the Alberta legislature. Perhaps it was your first visit while you were a school child and your class was visiting the building and you threw a coin into the fountain at the centre of the legislature rotunda, which was installed in 1959 to mark her majesty's first visit to Alberta as Queen.

"Maybe you were here in 2005 as Alberta celebrated its centennial year in confederation and had been among the thousands of well wishers who greeted Her late Majesty and Duke of Edinburgh as they talked about the legislature grounds during what would be their final visit to our province."

As a third audience member put it, "She’s the only queen I knew."