The world junior championship that wasn't: How Canada's hockey holiday tradition went from celebration to cancellation

Alberta’s second World Juniors in as many years didn’t feel right from the start.

Pre-tournament games were rescheduled, reduced to one per team and then even one of those was cancelled due to COVID-19.

By the time Germany and Finland hit the ice on Boxing Day to open the tournament, three players had already tested positive.

“We were very much playing catch up here with an evolving situation,” said Dr. Matt Robbins, medical supervisor for the International Ice Hockey Federation.

More positive tests followed, resulting in one forfeited game on Tuesday, and the cancellation of the best-of-three relegation round.

By Wednesday, the tournament’s cancellation seemed increasingly inevitable in a week where Alberta twice broke a daily COVID-19 case count record that had been set eight months before.

The reality that three games set for Wednesday would have to be forfeited meant “the sportive integrity of the event has been compromised,” the IIHF said. 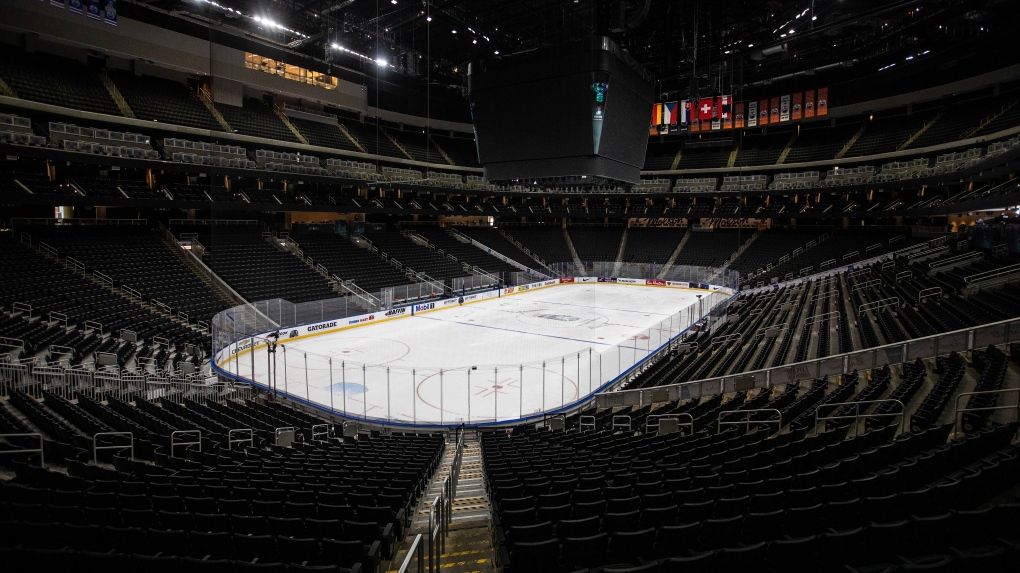 Rogers Place arena sits empty after the cancellation of the IIHF World Junior Hockey Championship in Edmonton on Wednesday, December 29, 2021. THE CANADIAN PRESS/Jason Franson The World Juniors ended with a press conference instead of a medal celebration, and with just nine of a possible 31 games actually getting played.

“We came up against an opponent that was not on the ice, but that was bigger than all of us,” said Hockey Canada CEO Tom Renney.

It was news players were dreading and struggling to understand.

“I don’t really get how this happens,” said German defenceman Luca Munzenberger in a phone interview following the cancellation of Tuesday’s USA versus Switzerland game.

“We’re getting tested every day and somehow after two weeks already, someone’s tested positive. The situation just sucks because we all just want to play the game of hockey and play the World Juniors with the best players.”

Fans felt let down too. Dawn Wegnar drove nine hours with her husband from Saskatchewan to Edmonton to watch Team Canada.

"It's really disappointing for us,” she said. “I feel really badly for the families of the kids that are playing in this that have come a lot further than we have."

Unlike last year’s tournament, this year’s wasn’t held in a bubble environment.

Teams stayed at hotels open to the public, sharing hallways, elevators and common areas. Players complained about their proximity to the public, including at their Red Deer hotel where a wedding reception was hosted the night of a game. 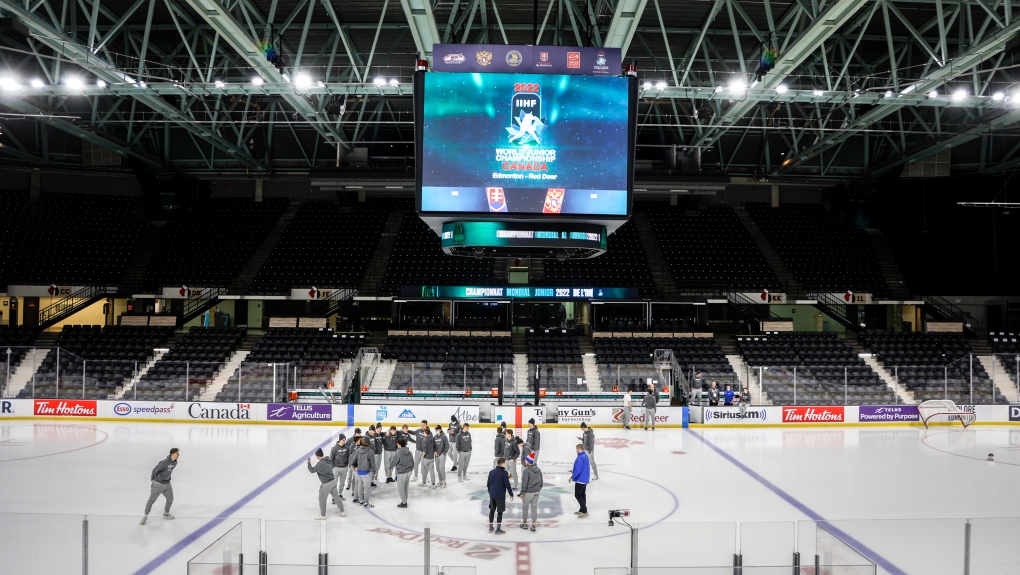 Players from the Slovakian team gather at centre ice after the IIHF World Junior Hockey Championship was cancelled in Red Deer, Alberta on Wednesday, Dec. 29, 2021.THE CANADIAN PRESS/Jeff McIntosh The arrangement proved insufficient in a month that’s seen the Omicron variant grow exponentially in Alberta and elsewhere.

That rapid rise caught organizers off guard, and in a constant state of trying to keep up while adjusting protocols that had been designed in November.

“Because the Omicron variant wasn't as prevalent as it is today, the sentiment was that our restrictive or protected environment was too restrictive,” said Scott Smith, Hockey Canada’s chief operating officer.

Last year’s bubble took three months to organize, Smith said, and couldn’t be replicated in such a short time frame as the pandemic situation evolved.

“As teams arrived and things changed in those first seven days … we did everything we could to look at opportunities to surround and protect the teams.”

IIHF president Luc Tardif noted organizers had a duty to care for the players, many of whom are minors.

“Every time, we followed medical advice,” he said. “And have been happy we did.”

On the ice, there were a few moments to savour.

Fans witnessed what could turn out to be three first overall picks – Connor Bedard, Shane Wright and Owen Power – skate on the same ice, with Bedard becoming the first 16-year-old Canadian to score a World Juniors hat-trick since Wayne Gretzky in 1977. 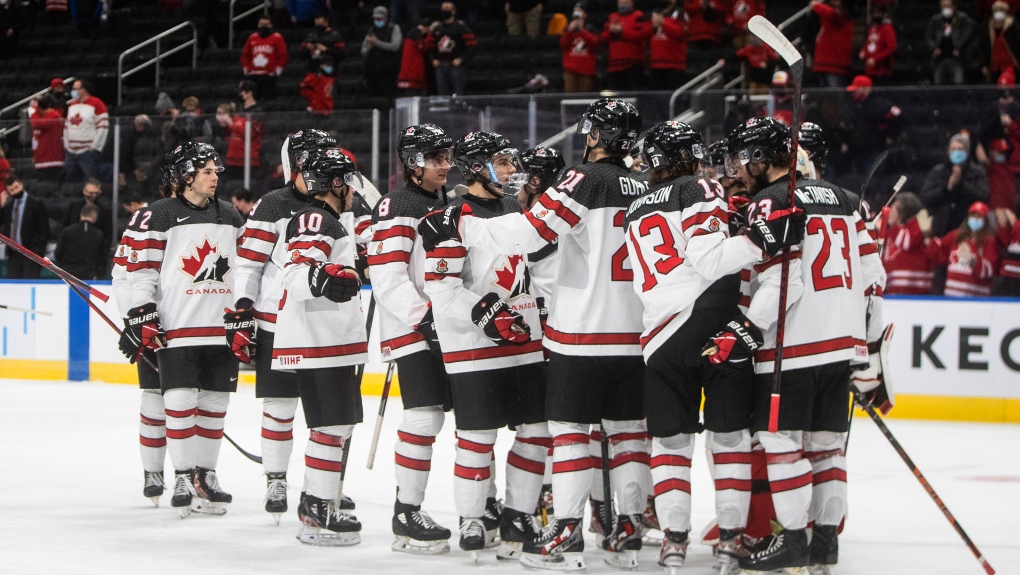 Team Germany, a year removed from opening the tournament down nine skaters due to COVID-19, reprised their overachiever role in scoring an overtime upset over Czechia.

And, the underdog Austrians found moments of jubilation in a blowout defeat to Canada, scoring twice and prompting a polka-themed goal horn celebration.

But fans also spoke with their feet and largely stayed away.

Attendance in Edmonton, expected to be in excess of 18,000 at the start of December, never reached even half of the 50 per cent attendance limit mandated by renewed public health restrictions, which also banned food and drink at games.

While the tournament is officially cancelled, the IIHF also said it’s not completely dead yet.

Tardif indicated it could be resurrected this summer, saying he hoped to have “a good surprise” for frustrated fans within the next month.

“We're not going to give up,” he said. “I think we deserve that to the young players and give them this important competition.”

But even if the sizable logistical hurdles can be overcome for a summertime return, it won’t be the holiday season spectacle it appeared it would be just a few weeks ago.

For now, players, fans and staff are all left to come to terms with Alberta’s world junior championship that wasn’t.