This Edmonton woman is allergic to cold temperatures

EDMONTON -- An Edmonton woman is allergic to the cold.

Emma Brown has cold urticaria, a severe allergy to the cold that causes her to break out into hives when she’s exposed to a cold stimulus.

“It’s something as simple as a cold breeze, or like cold water on skin, it just causes us to react,” said Emma.

The 18-year-old was officially diagnosed when she was 16, after years of thinking her symptoms were just a part of regular life.

“When I was little I’d go out for recess and come back in and it’s like, ‘Oh yeah, my hands are itchy, that’s normal,’” said Emma.

Emma’s mom, Tina Brown, says she didn’t think a person could be allergic to the cold.

“She’d be bright red and [have] those little cherry cheeks, but then you’d see these hives on there and I’m like, ‘What is this?’ But being a mom I’m like, ‘Oh, you’re fine, shake it off, you’ll be OK,’” said Tina.

After seeing a story about someone else with the same symptoms, Emma did some research.

She found the ice cube test, where an ice cube is placed on the skin for five minutes to test for a reaction.

“Most people will just turn red, or be a little numb. For me, my whole arm broke out into hives,” says Emma.

“I went to my doctor and told him about it and he did a little bit of research and he was like, ‘Yeah, you’re allergic to the cold.’”

The allergy makes daily tasks a challenge for Emma, something simple like walking to her car in the winter months requires a lot of layers. If she doesn’t, her hands swell up and any exposed skin breaks into hives.

“I had it happen yesterday to me,” said Emma. “I was walking to my car from a car park and I got in my car and it was so cold my hands started swelling up.” 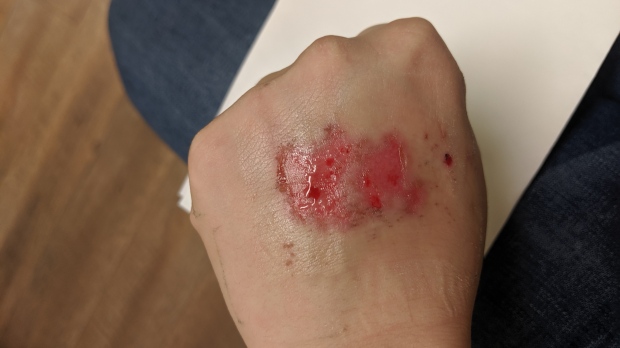 Emma says she tries to calm down her allergy by taking a hot shower, or using a heated blanket to warm up. But she always carries an EpiPen in case of an emergency.

“Say I’m outside on a walk and I’m all alone and I fall. There’s a high chance for my throat to swell up and I could actually stop breathing,” says Emma.

“Any exposure to the cold, you know, people get it sometimes doing the dishes if you use cold water,” said Dr. Harissios Vliagoftis, Professor of Medicine at the University of Alberta.

He says people like Emma who are allergic to the cold will likely always have the allergy, but the severity of their symptoms could improve over time.

“Even some people will develop really severe reactions and they can have anaphylaxis,” said Vliagoftis.

“Some people get it when they eat peanuts for example, if they are allergic to peanuts. The same can happen to you if you’re allergic to the cold.”

Taking antihistamines can combat the symptoms of the cold allergy for some people says Vliagoftis, but there’s also an alternative approach to dealing with the allergy.

“We don’t do it often, but we even can desensitize people to cold. So we can expose them progressively to colder environments, and with time it could make them more tolerable to these environments,” said Vliagoftis.

“I’m used to it. It’s a normal thing for me. Yeah, I go outside and break out into hives. So as much as it would be nice to go away, it’s kind of a funny story to tell people,” said Emma.

Emma isn’t the only one in her family that has cold urticaria.

“I have three children that are allergic to the cold, it’s like, it’s unbelievable,” said Tina. “Even I don’t believe it.”

For the Brown family, the parents are the ones doing the majority of the winter chores.

“It’s really up to me and my husband to do the winter chores more than them, because it’s just not worth it. They’re so uncomfortable afterwards,” said Tina.

Emma says she’s hopeful that telling her story will help people with the same symptoms realize they’re not alone.

“If I can actually help someone else learn that they are not insane, and this is a real thing then that would be amazing,” said Emma.