'This relaunch is based on a lot of hope': Some say Alberta's back-to-school plan falls short 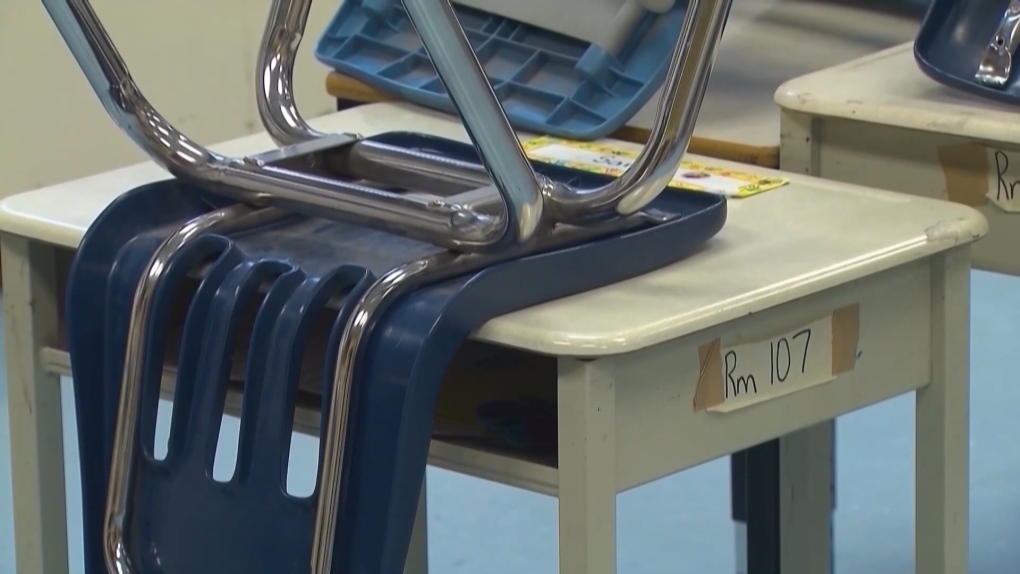 A desk in an empty classroom. (file)

EDMONTON -- The Alberta Government's decision to send students back to class this fall has prompted questions and concerns about how and even if it can be done safely.

Physical distancing is possible in the school yard, but many teachers are wondering if the same can be said for the classroom.

"I have joked about buying my own hazmat suit and actually looked it up on Amazon," said teacher Simone Chalifoux.

Chalifoux supports a return to class but feels the province's plan, which does not limit class sizes, will create logistical issues.

"How do I as one person help, if I'm lucky, 15 students wash their hands?" asked Chalifoux.

Chalifoux says she doesn't know what to do with her own child, who's supposed to start Grade 10 this fall. Her child is immunocompromised, presenting parents like her, who work during the day, with a difficult choice.

"Most of those people are already saying there is no way they can safely send their kids back to school with the way it's set up right now," said Chalifoux.

The provincial government has given school boards guidelines for how to reopen during the pandemic. They suggest staggering start times, having student cohorts, and having regular cleaning, screening and sanitization. They even suggest masks when physical distancing isn't possible, but none of it is considered mandatory.

"We are taking the guidance of Dr. Hinshaw," said Education Minister Adriana LaGrange. "At this time her recommendation is that we do not need to require masking."

"I won't be mandating specifics to school divisions, that's where the local autonomy comes in," said LaGrange.

The Education Minister has given schools the green light to dip into their reserves to pay for PPE, but Edmonton Public says that money should be used in the classroom, and not on cleaning supplies.

"To use that money for cleaning supplies and hand sanitizers is just not acceptable in my mind," said EPSB chair Trisha Estabrooks.

With support staff laid off, schools are already going in shorthanded, but space is the biggest issue. And the higher the grade, the worse it gets says Estabrooks.

Edmonton Public says "home schooling will be an option" but like the health guidelines, every division will have something different.

"That is going to be our biggest challenge, how do we set up our classes so kids can be two metres apart, and I'll be honest there'll be situations where that will not be possible," said Estabrooks.

She says some additional measures will be put in place like more frequent hand washing, and students all facing the same direction in a classroom.

Edmonton Public high schools will be moved to a quarterly semester system in the fall to help make smaller class sizes, and relieve some of the pressure, says Estabrooks.

The opposition NDP say the province's return to school program has significant flaws. Critics say it will be impossible to maintain physical distancing without a cap on classroom sizes.

They suggest Alberta should follow Ontario's lead and put a 15 student limit in place.

NDP leader Rachel Notley says the successes of many schools the UCP has referred to as examples for how Alberta's back-to-school plan will work, had additional funding in place as well as decreased class sizes.

"They talked about the so-called success of Calgary Catholic going back to school this summer, it's true they did have success, there were no new cases there, they also capped their class sizes at 14," said Notley.

Notley said all other successful educational systems the UCP used as examples such as Norway, Denmark, and B.C., all had decreased class sizes, some had measures like Plexiglas installed, and others had students attend class on alternate days.

"They can't pick and choose different parts of successful plans and ignore the measures that cost money and protect kids," said Notley.

As for increased cleaning and sanitation, a representative for custodians says asking them to do more without more funding is unrealistic.

"It is reasonable to ask custodians to change how and when they might clean, but to assume under most school division staffing models that 'more cleaning' can be achieved without additional capital just defies physics," said CUPE Local 474 President John Vradenburgh.

Vradenburgh says custodians will be focusing on mitigating spread of COVID-19 as best they can, but will not be able to completely eliminate spread through surface contact.

"We're working with our board because we care about kids, we're going to throw every effort towards battling this terrible virus, but this relaunch is based on a lot of hope, and I feel like I'm in charge of a light brigade," said Vradenburgh.

RISK IS LOW, IF GUIDELINES ARE FOLLOWED

But a local infectious disease expert wants to ease concerns about the province's back-to-school plan. University of Alberta's Dr. Lynora Saxinger says if cases don't skyrocket in Alberta the risk of transmission is low, as long as public health guidelines are followed.

"I think the risk to the children is low, and that's important for people to realize," said Saxinger.

Saxinger says each classroom would be considered a cohort, meaning students would only interact with each other. They'd go to recess together and move to other classes together.

She says masks could be more harmful than helpful for younger students who might not wear them properly, but more reasonable for kids in Junior and High School.

Keeping kids at home, even if they only have a runny nose or mild sore throat will be crucial, says Saxinger, and adds constant testing would be helpful to see if COVID is present in a school.

"Kids don't go to school with symptoms, teachers and workers do not go to work with symptoms, and it's a massive shift, but it's an important one," said Saxinger.

Edmonton Public says it's planning to release details about what scenario one will look like inside its schools in the next week.