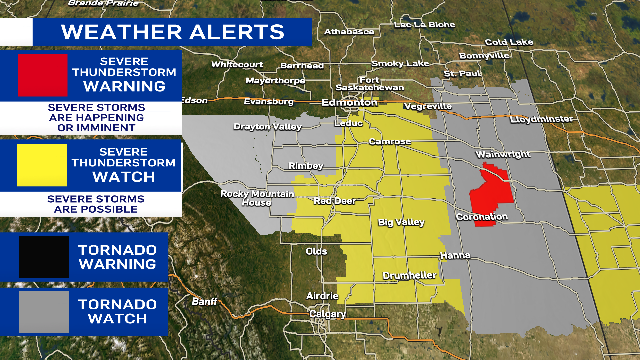 All of the tornado warnings that were in effect for areas near Coronation this afternoon have been ended by Environment and Climate Change Canada.

Earlier this afternoon, a tornado was reported near the town of Alliance (approximately 80 kilometres south of Viking). The tornado warning for that storm has ended and is downgraded to a severe thunderstorm warning.

Funnel clouds have also been spotted in a few areas around the province, including in Red Deer.

Tornado watches (potential for storms to produce a tornado) are in effect for all of east-central Alberta.

The Red Deer area, as well as Drayton Valley-Rimbey-Rocky Mountain House regions, are under a weather advisory relating to the risk of funnel clouds with a low likelihood of touching down.

There is not enough evidence to open a formal church investigation into sexual assault allegations against Quebec Cardinal Marc Ouellet, Pope Francis said Thursday. The pontiff issued his statement through Matteo Bruni, director of the Holy See press office.

Turkey's leader and the UN chief met in Ukraine with President Volodymr Zelenskyy on Thursday in a high-powered bid to ratchet down a war raging for nearly six months. But little immediate progress was reported.