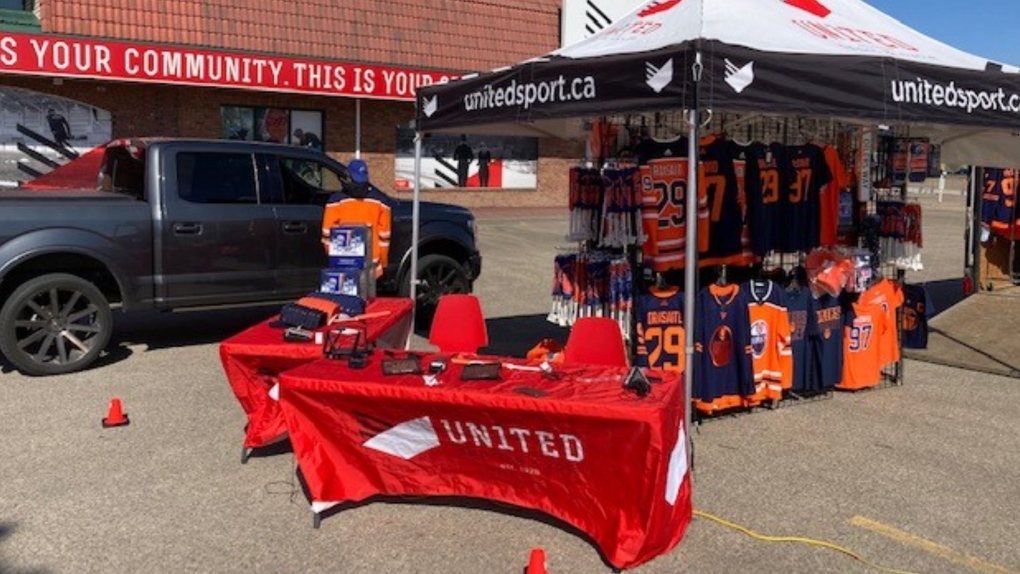 Edmonton Oilers fans can buy merchandise without leaving their vehicle as the team gets ready for its first playoffs appearance since 2017. (Dave Mitchell/CTV News Edmonton)

EDMONTON -- Getting all geared up for what Edmonton Oilers fans are hoping is a long playoff run just got a little easier.

Fans can now shop for their favourite jerseys and car flags without getting out of their vehicles at a drive-thru parking lot location at United Cycle on Gateway Boulevard south of Whyte Avenue.

“It's playoff time and we haven’t been able to say that in a while, and it's gonna be different this year we know, so we had to do business different,” says Kelly Hodgson, United Cycle operations manager.

The tented location will be open from 7-11 a.m. every morning until the weekend.

The Oilers have just three games left in the regular season before they embark on the playoffs for the first time since 2017.

Added Hodgson: “They are doing some special things right now and I think they’re gearing up in the right way and of course we’ll have a very formidable opponent in the first one... but I think everybody is looking to get ahead and see what happens with us and Toronto.”

Since going to Game 7 of the Stanley Cup Finals in 2006, where they lost to the Carolina Hurricanes, the Oilers have only managed a single playoff series victory in 14 years.

Later this month, the Oilers will take on either Winnipeg or Montreal in the opening round of the NHL playoffs.