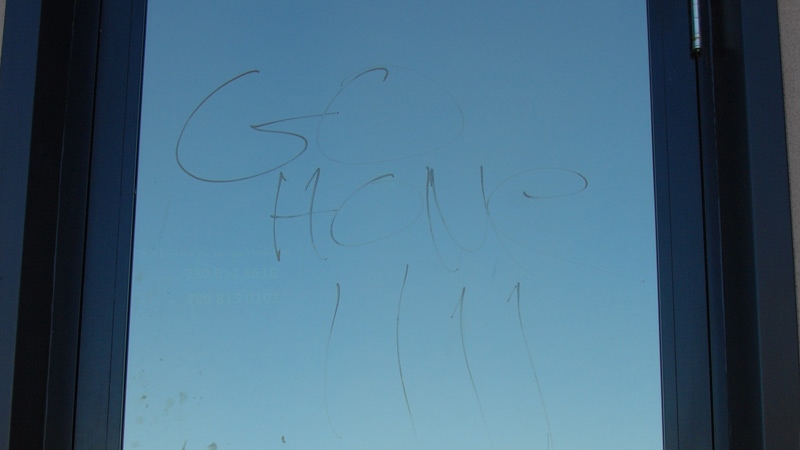 A local mosque in Cold Lake was vandalized with the words “Go Home” written on the front door. (RCMP/ Supplied)

A local mosque in Cold Lake was vandalized with the words “Go Home” written on the front door, for the second time in a little over a year.

RCMP officers say sometime overnight Friday the words “Go Home” were written on the front door of the mosque and “Catch Me If You Can” was written on an inside wall of an ATM room at the CIBC bank, both with an orange marker.

Investigators are reviewing surveillance video from multiple locations and say they are treating the vandalism as criminal mischief.

Last October, vandals struck the same mosque in the city with the words ‘Go Home’ and ‘Canada’ spray-painted on the front. Multiple windows were also broken.

At the time, Cold Lake residents quickly coordinated and worked together to remove the messages from the building.

The MP for Fort McMurray-Cold Lake, David Yurdiga issued a statement Sunday: “This morning I was saddened to hear that once again the Cold Lake Mosque was vandalized… This attempt to intimidate Muslims in our community will not be tolerated.”

“The perpetrators of this crime don’t seem to understand that the Muslims in our community are just as at home as everyone else,” Yurdiga said.

“Muslims are our neighbors, friends, and local volunteers. I think Mayor Copeland was right last year when he said that perhaps the vandal should reevaluate whether they belong in Cold Lake.”