'We are confident that they are out there': Scientists still searching for August meteorites

Scientists at the University of Alberta are still searching for meteorites from the fireball that lit up Edmonton skies on Aug. 31.

Many people shared video in the days after the fireball was spotted, but pieces of the fireball have been elusive.

Working with Curtin University in Perth Australia, scientists have narrowed down a potential landing zone to the area southwest of Camrose.

“While we haven’t found any meteorites yet, we are confident that they are out there,” explained Chris Herd, professor in the Department of Earth and Atmopheric Sciences and curator of the University of Alberta Meteorite Collection in a written release.

Herd and his team are eager to find and study meteorites, which they estimate to weigh about one kilogram.

“Maybe a single piece instead of multiple pieces, maybe the size of a fist or a couple of fists together. We could be looking for a while before something shows up,” Herd told CTV News Edmonton.

While most of the area they’re combing over is covered in crops, Herd said it will be an easier search once they’re harvested.

“My guess is that it’s in one of these fields,” he said.

Nearby farm owner Rod Ross said he and his wife were watching a movie when the streaking meteor lit up his home. 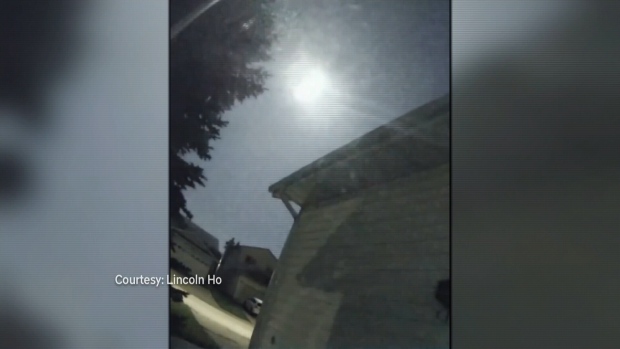 Since then, he’s noticed an increase in the number of people searching for fragments.

“I was just on my way to work and there was a whole herd of U of A people on the roadway,” he said. “I asked the one fellow what it was all about, and he said they were searching for space rocks.”

Herd said meteorite researchers were able to narrow down the search area because of a system of cameras set up to track such celestial events.

The so-called “fireball network” has five to six cameras in place and the Aug. 31 meteor was the system’s first big test.

He said in this case, the meteor was so well-documented that researchers were able to determine the rock’s orbit and where it came from in the solar system.

“Whenever you have the new fall of a meteorite it’s the arrival of a rock from space. There’s so much we can do with that rock once we have it in the lab. We can cut it open and classify it,” he said.

Search teams are plunging magnet-tipped rods into any holes or depressions they find to try to locate the space rocks.

They’re also asking the public to keep an eye out for any unusual rocks they come across.

The university is sharing tips on how to identify a meteorite and reminding searchers that meteorites found on public right of ways belong to the finder and those found on private land belong to the landowner.