White, male and mainstream: A look at the Edmonton candidates for the 2019 election 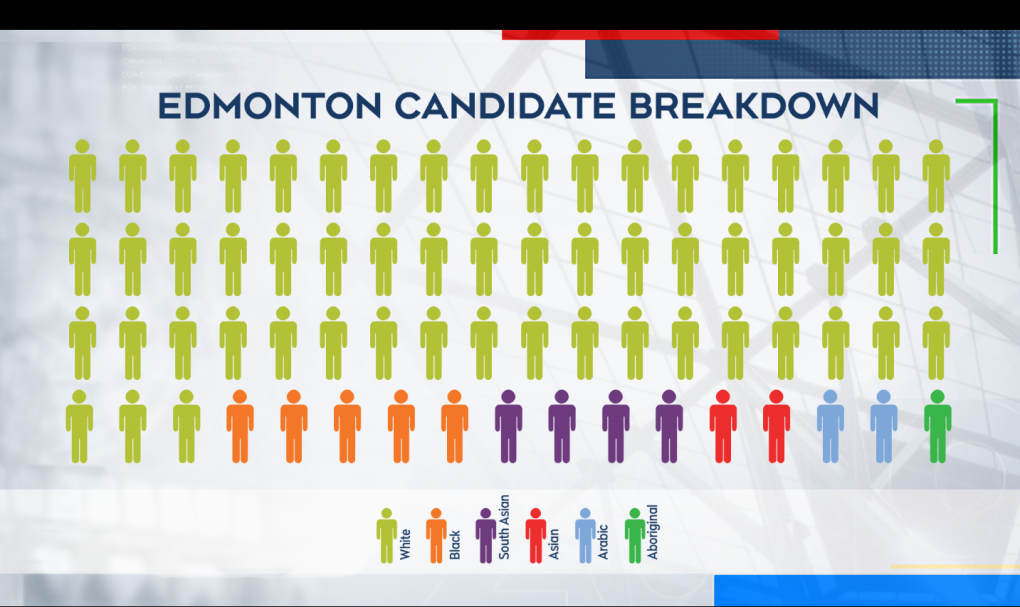 Seventy-one candidates from 10 parties, as well as two independents, will contest 11 ridings across the Edmonton area.

EDMONTON -- A CTV News review of the Edmonton-area candidates running in this month’s federal election shows they are generally white, male and representing established parties.

Seventy-one candidates from 10 parties, as well as two independents, will contest 11 ridings across the Edmonton area.

Candidates in Alberta had to file their paperwork with Elections Canada by 2 p.m. MDT on Sept. 30. CTV News used that data and cross-referenced it with party biographies, interviews and social media.

Here’s a breakdown of those in the Edmonton area seeking to be elected, or re-elected, as a member of parliament.

Twenty-three of the 71 Edmonton-area candidates will be women, representing 32.4 per cent of the candidates. At least one woman is running in all 11 ridings.

Women comprise almost exactly half of the Edmonton’s census metropolitan area’s population, according to the 2016 federal census.

The Green Party has the most women candidates in the city with seven. Of the other major parties, the NDP has five women candidates, the Liberals and People’s Party have three each, while no women are running for the Conservatives in the Edmonton area.

Four of the nine candidates in Edmonton Griesbach are women, the most in any local riding.

A sizable majority of Edmonton-area candidates are white, comprising 80.2 per cent of all those running.

The 2016 census found that just over 57 per cent of Edmontonians are of European background with visible minorities, including those of Aboriginal backgrounds, making up the remaining 43 per cent.

The NDP and PPC have the most white Edmonton-area candidates with 10 each, followed by the Greens and Conservatives with nine each. Six of the 11 Liberal candidates are white.

Election 2019: Visible Minorities Running for Each Party in Edmonton
Infogram

The Liberals, Conservatives, Greens, New Democrats and People’s Party of Canada are all running full slates of 11 candidates in the city.

Parties who elected MPs in the 2015 election are backing 44 of the 71 Edmonton-area candidates. PPC Leader Maxime Bernier is the party’s lone MP but was elected as a Conservative in 2016.