Young Oilers rise to the occasion, but fall short against the Boston Bruins 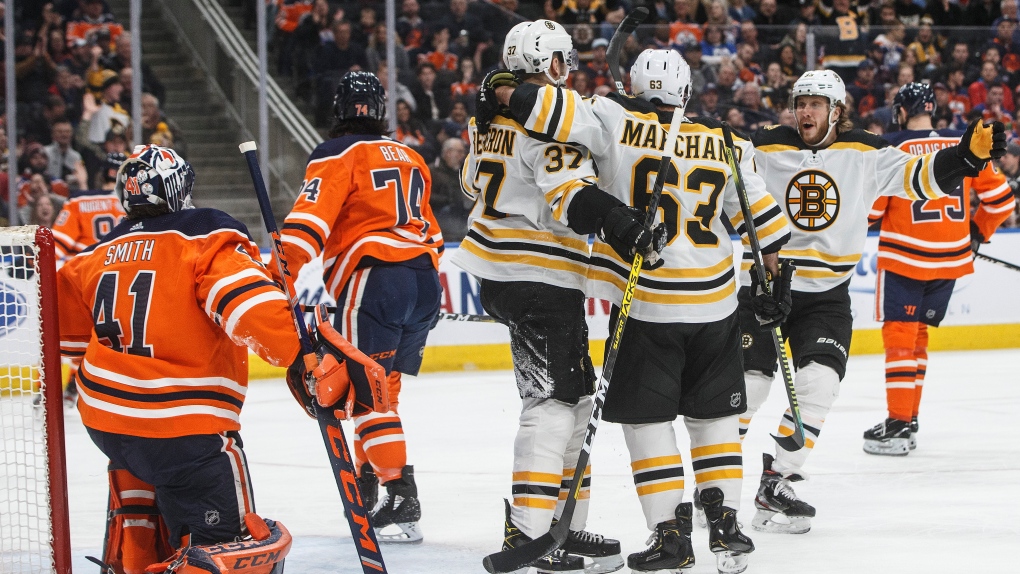 Boston Bruins celebrate a goal against the Edmonton Oilers as goalie Mike Smith (41) looks on during first period NHL action in Edmonton, Alta., on Wednesday February 19, 2020. THE CANADIAN PRESS/Jason Franson

EDMONTON -- The Oilers continue to prove, their depth isn’t as dire as it seemed in the first half of the season, as prospects continue to show significant improvement while playing with the big club.

The severely outnumbered, and on paper, outmatched Oilers fell just short of upsetting the league’s best Boston Bruins, but managed to take home a point in the standings, losing 2-1 in overtime and earning seven of a possible 10 points in the first five games without Connor McDavid.

While Oilers defenceman, Darnell Nurse, told reporters the team is “over the moral victories”, this was much more than a confidence booster for a roster with three players who’ve yet to hit double digits in games played with Edmonton this season, and two others with less than 20 under their belt.

The first period is what most people expected. The injury-riddled Oilers playing without, as mentioned, Connor McDavid, Oscar Klefbom, Zack Kassian, James Neal and Joakim Nygard looked severely outmatched by a star-studded Bruins squad, registering only two shots on Boston in the first 20 minutes. Though they tempered Boston’s offence, allowing just one goal form its top line as David Pastrnak and Brad Marchand set up Patrice Bergeron for the only goal of the period.

But something changed in the second period. The Oilers looked more like a team leading their division, not looking intimidated by Boston’s strong forecheck and not looking like they were without many key players. While the penalties started to pile up, Edmonton’s penalty kill was up to the task, killing all seven penalties against the team that sits behind the Oilers in second place for powerplay efficiency.

"Our penalty kill has been pretty strong all year," Head Coach Dave Tippett said after the game. "That’s a powerplay that is really, really dangerous so I’d rather not put them on the powerplay seven times, but we did and we got away with it tonight."

But another highlight in the loss was the way some of the Oilers' young guys performed against a battle tested Bruins team, particularly in the final 40 minutes.

Kailer Yamamoto was his disruptive self causing multiple Bruins turnovers in their defensive in, and young defenseman like Caleb Jones stepped up getting minutes on the second power play unit, while Laggeson contributed to a successful night on the penalty kill.

"I like the way Jones' game evolved during that game." Tippet said. "Same with Lagesson, as the game went on they got better."

"Laggy (Lagesson) steps up and plays really well for us, Jonesy goes up and plays on the second powerplay really well,” Sam Gagne said. "We've had Benny (Tyler Benson) come in here and play some important minutes and Yamo (Yamamoto) has been huge for us and you want to see how guys respond to challenges and those guys did a good job tonight."

Another player deserving of credit is Mike Smith, whose been a better version of himself since the turn of the new year. Not only did he battle to make 29 saves on the night, the veteran netminder also helped anchor the young defensive corps.

"He’s so big and strong out there," Oilers Defenceman Ethan Bear, said of his goalie. "He helps our confidence in the back end. He’s a hell of a goalie."

Edmonton’s effort paid off early in the third on the team’s fourth powerplay of the game. Ethan Bear’s point shot was redirected by Sam Gagne and beat Tuukka Rask to tie things at 1-1. You could feel the building’s collective mindset shift from “At least we’re keeping it close.” to “we could win this!”

It seemed to have rattled the Bruins as well.

Seemingly seeking retribution for a clean hit that knocked him to the ice moments earlier, fourth liner Joakim Nordstrom took exception to a clean Sam Gagne hit on one of his teammates in his own end and getting two minutes for roughing. Though the powerplay was cut short on a slashing call to Darnell Nurse a short time later.

Edmonton’s golden opportunity came late in the third period when Lagesson drew a tripping penalty on Pastrnak with just 2:30 left in regulation. But even with the leagues second best scorer in the box, the Oilers could not capitalize, and it came back to bite them.

Just 1:14 into the extra frame, David Krejci sent Pastrnak in all alone on Mike Smith, and he went fivehole on the Oilers goalie for the win.

A disappointing result following a gutsy, grimy effort from Edmonton, but one Tippett can live with.

"We got a point out of it, it would have been nice to get two but we got a hard fought point and we move on."