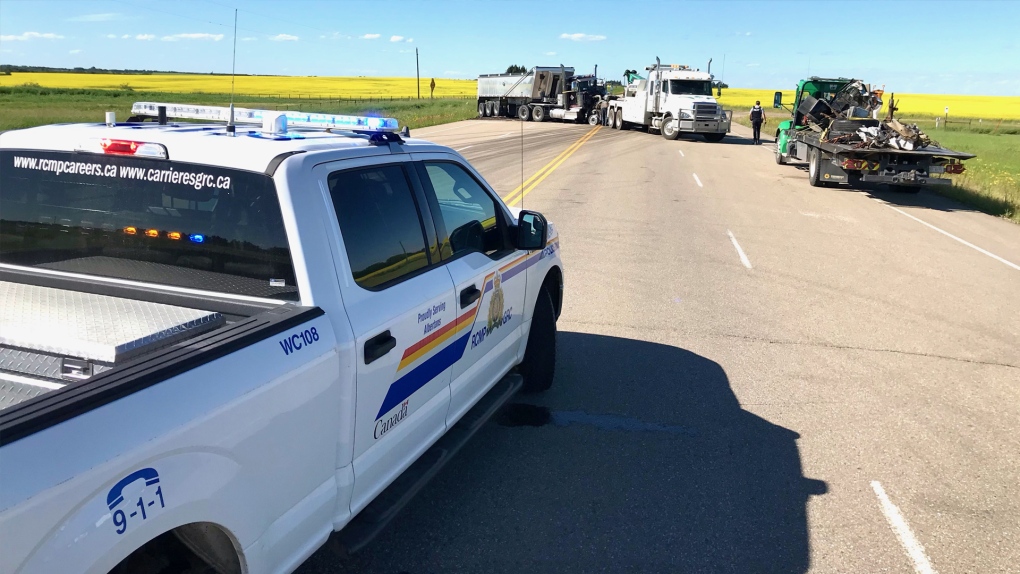 Two people are dead after a crash near Camrose, Alta. on July 20, 2022. (Sean Amato/CTV News Edmonton

Two people were killed Wednesday morning when the pickup they were in was involved in a four-vehicle collision just west of Camrose, Alta.

Two other people were transported to hospital, one of them was airlifted by STARS Air Ambulance, a Mountie at the scene told CTV News Edmonton.

A semi truck, a flatbed truck and two pickups were all towed from the scene.

Highway 21 was closed for several hours, but reopened around 5:30 p.m.

RCMP said the cause of the collision was still under investigation but alcohol was not believed to be a factor.

Camrose is located about 60 kilometres southeast of Edmonton.

Feds to lift border vaccine mandates, mandatory use of ArriveCan

The federal government is expected to officially announce the end of COVID-19 border restrictions today, including mandatory vaccinations, testing and quarantine of international travellers.

A gunman killed 13 people, including seven children, and wounded 21 other people in a school in central Russia on Monday, authorities said.

The recovery stage has begun after Fiona swept through Atlantic Canada, hundreds of troops have been deployed to help affected provinces, and many young Canadians feel they need an inheritance to reach their financial goals. Here's what you need to know to start your day.