Three legendary Edmonton Elks players were honoured Friday ahead of their names being added to the team's Wall of Honour this weekend.

On Saturday evening, when the Elks challenge the Saskatchewan Roughriders, Jim Germany, Joe Hollimon, and Ed Jones will have their names officially added to the EE honor wall in Commonwealth Stadium.

Hollimon was named the CFL All-Star in 1978, after two CFL West All-Star awards.

Throughout his nine-year career with the team, Hollimon intercepted 40 passes for 692 yards.

In an interview with CTV News Edmonton, Hollimon said being recognized by his team meant the world to him.

"From the age of eight, I wanted to be a football player," he said. "So being here today and being honoured in the stadium I played professional football in, it's so great."

While Hollimon believes individual talent and skill are important, team support is critical to enable the best plays. He said he wouldn't have had the career he had without his teammates' support.

"When you put on a football uniform, and you go out on the field, you go out as a group of individuals," he told CTV News. "But the teams that I think are the most successful are able to take the 'I am' an individual mentality and turn that into 'we are a team.' 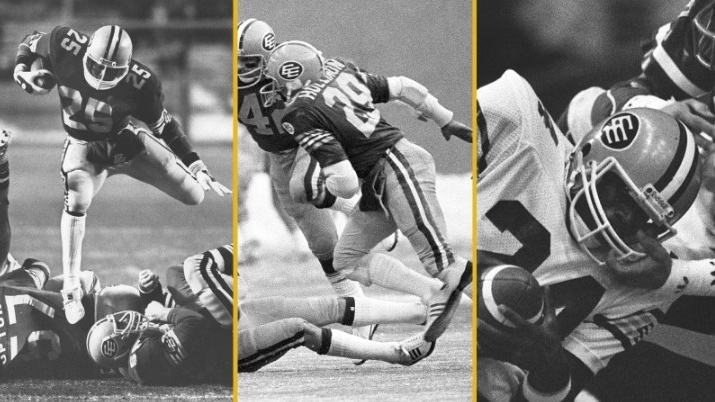 The trio of Wall of Honour inductees (Source: Edmonton Elks).

Defensive back Jones played 12 games with the Buffalo Bills and then joined Edmonton in 1976. He would go on to be selected CFL West All-Star four years in a row, and league All Star three times.

In 1980, Jones had the best season of his Canadian football career, which included 10 interceptions for 212 yards, and three returned to score a touchdown.

Despite being drafted straight out of university by the NFL's St. Louis Cardinals in 1975, Germany never played a game in the league and moved to the CFL two years later.

His seven-year career as a running back had him play alongside Neil Lumsden and quarterbacks Warren Moon and Tom Wilkinson.

Germany rushed for more than 1,000 yards in three seasons and tied the CFL record in 1981 for 18 rushing touchdowns.

When asked if he ever thought he would be part of the Wall of Honour, Germany simply said, "No."

"My friends would always say I would," he added. "(But), I never really thought about going on the wall."

"I always just played for the team. I didn't try to satisfy anyone else. I tried to give the max on every opportunity I had."