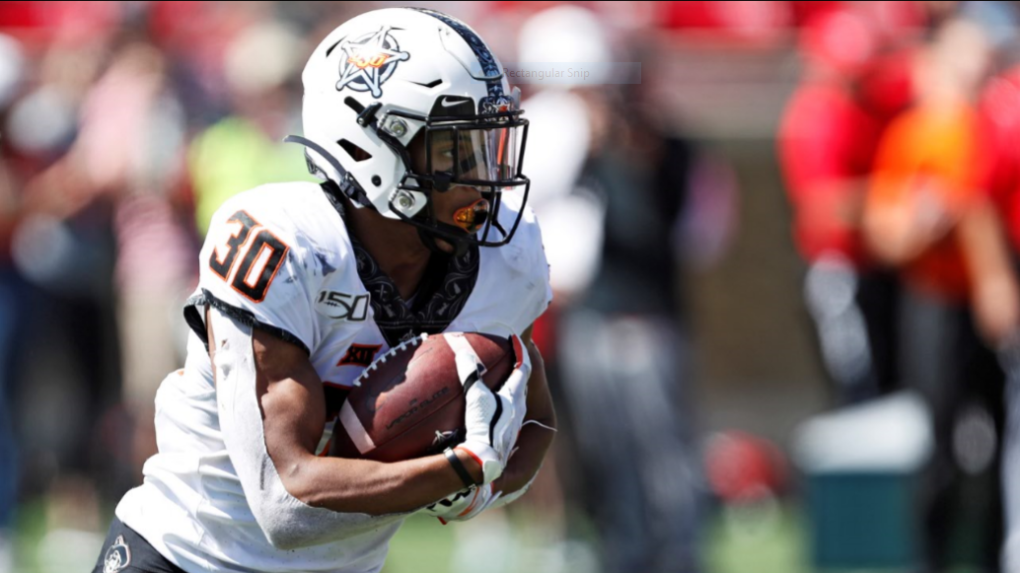 American college football's rushing leader is a Canadian. Chuba Hubbard, a native of Sherwood Park, Alta., has run for 1,094 yards in just six games this season, which is over 260 yards more than his nearest rival. (AP Photo / Brad Tollefson)

EDMONTON -- He’s college football’s leading rusher, an emerging star, and an out-of-nowhere Heisman Trophy candidate, but Sherwood Park’s Chuba Hubbard isn’t one for all the attention.

"I’m just like everybody else. I just play football, that’s the difference."

The soft-spoken Hubbard, 20, has burst onto the American college football stage, emerging as the leading rusher in the country while racking up 1,094 yards for the Oklahoma State Cowboys halfway through their 12-game season.

“It’s been a life changing time here at Oklahoma State to come from Canada, obviously this is hard to do so I’m blessed and thankful to be in this position that I’m in.”

“This year’s been pretty crazy.”

Those gaudy stats and the blazing speed have propelled Hubbard into the bright spotlight of U.S. college football.

His home games are afternoon-long sporting spectacles with marchings bands, fights songs and more than 55,000 fans watching in person, with tens of thousands more tuning in on TV from across the U.S.

It’s all a long way from his time with the Bev Facey Falcons.

“I support everyone back home and I’m thankful they support me.”

While Hubbard is still only in his second playing season, analysts are mentioning his name among the sport’s elite, with ESPN’s Kirk Herbstreit last week calling him the best player in the country so far this year.

'WE GET A LOT OF LEADERSHIP FROM CHUBA'

Hubbard is now the established starter on the team after injuries led OSU head coach Mike Gundy to give Hubbard playing time near the end of last season.

“We get a lot of leadership from Chuba,” Gundy told reporters earlier this week.

Hubbard also leads the country in carries with 162 rush attempts. The heavy workload has the team increasingly wary of burning out its leading rusher, especially given Hubbard has two more seasons of eligibility left after this year.

“I think all y’all would agree. It’s difficult to take him out of the game,” Gundy said. “But we have to do it.” 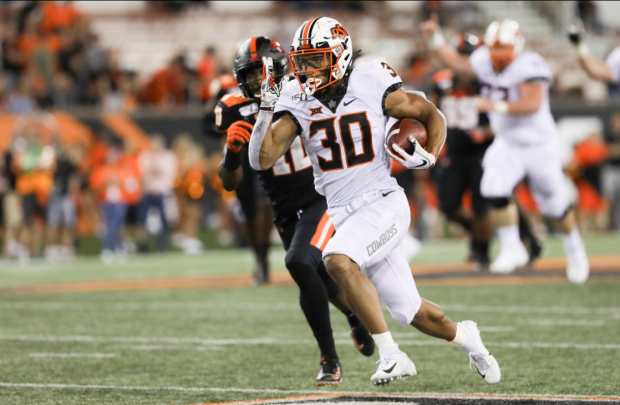 Gundy says consistency has been the key to Hubbard’s strong sophomore start.

“If you stop the race right now he’s in good shape, but we got a long way to go,” he said.

“If he stays strong and stays humble, he’ll be just fine."

PATH TO THE PROS

Hubbard is the latest star running back to emerge from the Stillwater, Okla. school.

Before going on to a hall of fame pro career, Barry Sanders made his mark at OSU, winning the 1988 Heisman Trophy.

Hubbard’s numbers this year no have him as an early candidate for the same award, given to college football’s most outstanding player.

“That’s all cool and I’m blessed to be recognized for that,” he said. “I try not to focus too much on that stuff. Too much of that stuff can hurt you.”

Chuba Hubbard is faster than....well everyone.

The Cowboys have lost two of their six games halfway through the season and won't be in contention for the national title. The Hesiman is traditionally awarded to a quarterback on a winning team, leaving Hubbard as something of a longshot.

But, he's also treading in territory that no Canadian has been in for a generation. Rueben Mayes (1984 - Washington St), Tony Mandarich (1988 - Michigan St) and Tim Biakabutuka (1995 - Michigan) are the only three players from north of the border to garner Heisman votes in the past 35 years.

For now, Hubbard is only looking to the season to come despite the bright future ahead.

“I don’t know what’s going to happen after this year,” he said.