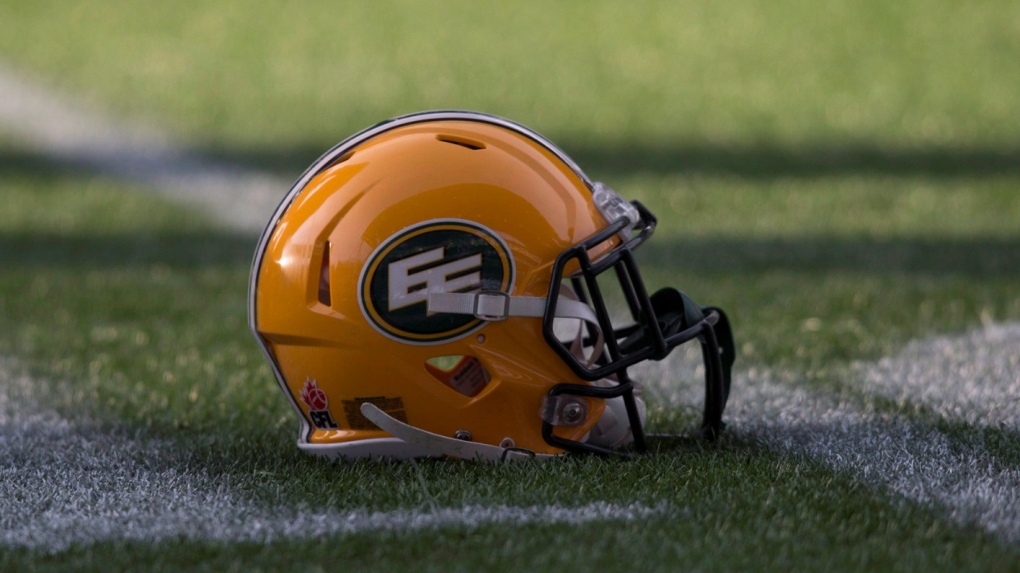 A Edmonton Eskimos helmet is seen on the field during a team practice session in Winnipeg, Man. Friday, Nov. 27, 2015. THE CANADIAN PRESS/Darryl Dyck

EDMONTON -- A second major sponsor of Edmonton's Canadian Football League club is calling on the team to change its name.

Sports Interaction, an online sportsbook operated out of Quebec by the Mohawk Council of Kahnawake, announced a deal with the team last year as the club's "official and exclusive online casino and sports gaming partner."

"Sports Interaction will be asking the Edmonton Eskimos to change its name so that we can continue supporting the club and its fans,” spokesman Ryan Stetson wrote in an email to CTV News.

The team has said it is accelerating its review of its team name and will report back by the end of July.

In a statement, the team says "we acknowledge and appreciate the feedback and input regarding our name" and that it takes the naming issue seriously."

"We will be seeking further input from the Inuit, our partners and other stakeholders to inform our decisions moving forward.  We’ll continue to listen carefully and with an open mind."

Sports Interaction is the second of the team's 12 "premier partners" to publicly state its displeasure with the team's name.

On July 7, CTV News was the first to reveal Belairdirect, a national home and auto insurer, had said it would end its relationship with the team if the name wasn't changed.

"At Belairdirect one of our core values is respect, which is founded on seeing diversity as a strength, being inclusive and collaborative," reads a statement from the company.

"In order for us to move forward and continue on with our partnership with the Edmonton Eskimos, we will need to see concrete action in the near future including a name change. We have shared our position with the team."

Belairdirect is a longtime sponsor of the team's 50/50 draw at Commonwealth Stadium.

A spokesman for TFB & Associates, the Canadian brand owners of lozenge manufacturer Fisherman's Friend, said the issue is "something we have been following closely."

"We support Edmonton’s CFL team’s re-engagement in discussions with the Inuit communities and are looking forward to the timely and respectful progression of those conversations along with a positive outcome for all."

Although it is listed as a premier sponsor, Boston Pizza said its relationship with the team came to an end due to a shift in corporate marketing strategy, and not necessarily due to the team's name.

"Our decision to end the sponsorship was made prior to recent events in society, and as part of a larger shift in our marketing strategy away from legacy sponsorships of professional sports teams," a company spokesperson told CTV News.

The Brick, Molson Coors, Discount Car and Truck Rental, James H. Brown and Associates, Save on Foods, Servus Credit Union, Telus and Tim Hortons all have not responded to multiple media requests filed by CTV News over more than week.

The team released its annual report on Wednesday which included some figures around support for a change away from the current name in its annual general report on Thursday.

The team also repeated its pledge to update the future of its name by month's end.