EDMONTON -- Edmonton City Council delayed a decision Tuesday on an affordable housing project that hundreds of community members rallied against.

Last September, about 400 people gathered to protest the Capital Region Housing proposal that they argued was “too big and too close” to Keheewin School.

Thirty-two residents registered to speak against the plan at City Hall late Tuesday night, causing council to hold over the rest of the public hearing and a decision until Wednesday morning.

Only three residents spoke in favour.

“We will lose the only soccer field that we use,” Gavin, a Grade 5 student at Keheewin, told council.

“The development will be so close to the bike racks and make that spot overcrowded. It is just too close,” he said.

The plan is for a mix of small scale row housing and 4-storey buildings totalling 135 units, which was scaled down from the original plan of 180 units. 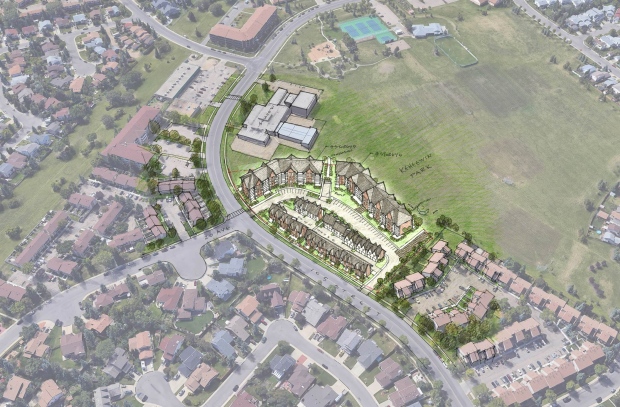 It would be built just north of Keheewin School at 105 Street and 20 Avenue.

Consultations on the project started in 2015 and included several meetings and the formation of a community advisory committee.

Traffic, crime, loss of sports fields and decreased property values were among the concerns residents raised during consultations.

“It’s all been brought up time and time again. No one has given me a good reason for why it would be a danger to students,” said resident Tony Pearson, who disagreed with many of his neighbours.

“I’ve heard personally, through my inbox, a lot of concern about the potential tenants of the building,” said Councillor Michael Walters.

He added that most residents don’t share that worry, they just don’t like the size and location of the development.

Still, safety concerns were raised by some residents on Tuesday.

“The justification for their worry is challenging for me to see at this moment in time,” Walters said.

Several residents said they are not against affordable housing but feel it’s being built too close to Keheewin School.

The shortest distance between the school and the housing units would be 27.5 metres or about 90 feet.

“We have a 13 hectare site and we have to butt it up right next to a school? That does not make sense,” said resident Matt Sommerfeldt.

A few residents spoke in favour of the development, including Joyce Madsen, who said as a young mother, she lived in affordable housing.

“That’s the kind of people that are going to be moving into this community. Folks that are suffering maybe some hard times and need some help. If I hadn’t had a community that provided that, I wouldn’t have become financially independent,” Madsen said.

Capital Region Housing is spearheading the project. Officials there said Tuesday that 9000 families are on a waiting list for affordable housing in Edmonton.

Council will resume the public hearing at 9:30 a.m. Wednesday.