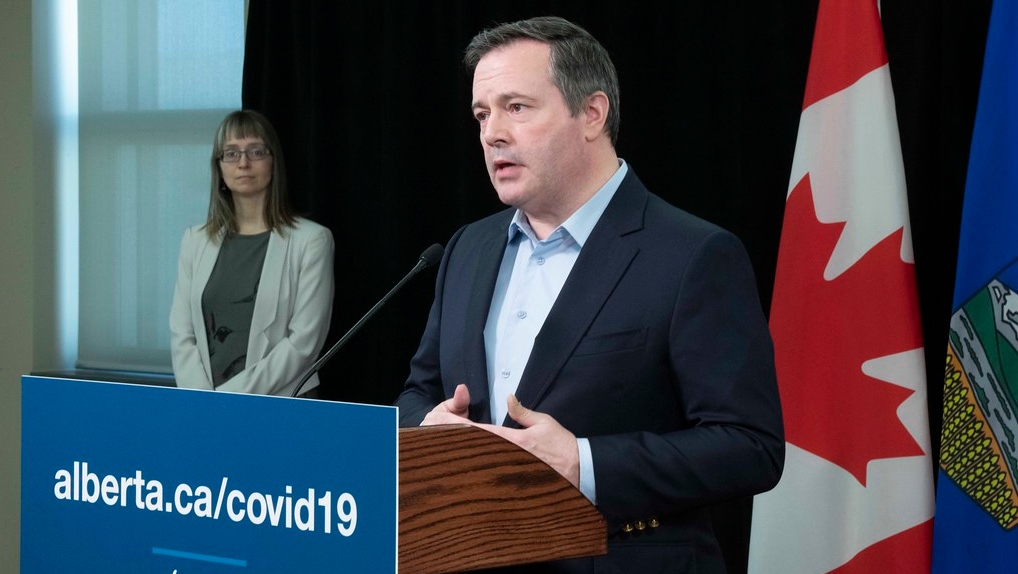 Premier Jason Kenney and Chief Medical Officer of health Dr. Deena Hinshaw during a news conference in the Edmonton Federal Building on Monday, April 20, 2020. (photography by Chris Schwarz/Government of Alberta)

EDMONTON -- Alberta continued to ease COVID-19 restrictions on Monday as cases of the variant and the positivity rate ticked up.

Premier Jason Kenney announced the province would loosen some indoor fitness rules and reopen public libraries as part of Step 2 of its Path Forward plan, but limitations linked to hotels, banquets and conference centres were extended.

"We're not out of the woods but we can continue taking small steps forward as we go into Step 2," the premier told media.

Kenney is worried about variant cases — Alberta Health reported 35 on Monday, increasing the total to 457 — and said the positivity rate "has risen a bit."

Contact tracers don't know the source of transmission for about a third of COVID-19 infections, Kenney said, but 30 per cent cases are linked to homes.

"We need to be very careful about at-home transmission," the premier said, adding it's too early to allow indoor gatherings.

"I know many Albertans are eager to get back to activities like running on the treadmill," Shandro said. "High intensity activities like that are still only allowed on a one-on-one basis with a trainer or for a household and one trainer."

Drop-in fitness is not allowed.

The province also reopened libraries with a limit of 15 per cent capacity.

'A SENSIBLE PACKAGE,' SAYS ONE DOC

A co-chair of the pandemic response committee of the Edmonton Zone Medical Staff Association called the government's approach to Step 2 wise.

"The guidelines are actually very limited... Overall, I think it's a sensible package," Dr. Noel Gibney told CTV News Edmonton, adding the announcement was "pleasantly surprising." He had anticipated something more when the news conference was pushed back and it was revealed Kenney and Shandro would be joining Dr. Deena Hinshaw.

Gibney said his only hesitation was related to already-opened restaurants, which he said are perfect transmission grounds.

"Technically tables are supposed to be spread apart and individuals should be from the same household, but to my knowledge nobody is checking that."

Hinshaw, the province's cheif medical officer of health, said officials will keep a close eye on hospitalizations, daily case counts, the positivity rate and R-value before they decide whether to ease more restrictions three weeks from now, "to watch for any concerning shifts that may require us to pause or reverse our current approach."

As of Sunday, Alberta Health Services had administered 235,508 doses and fully vaccinated 88,145 people.