EDMONTON -- For the second time in his life a Spruce Grove father has a new tattoo. This one is a little different from his first though. The new ink is actually a show of solidarity with his eight-year-old son.

Six months ago, Derek Prue Sr. noticed his son Derek Prue Jr. seemed self-conscious about a large birthmark on the left side of his torso. The boy was hesitant to take his shirt off when he went swimming.

So Prue Sr. decided to do something to show his son that having a mark on one's body is okay.

"I just wanted him to feel good in his own skin," Prue Sr. told CTV News Edmonton. "I thought it would be a nice thing to do to show him that he wasn't alone."

The father of six spent 30 painful hours in a Stony Plain, Alta., tattoo chair getting a mark to match his son's inked onto his chest.

"The pain was substantial," Prue Sr. said. "There were times for larger portions they did a little bit of a numbing." 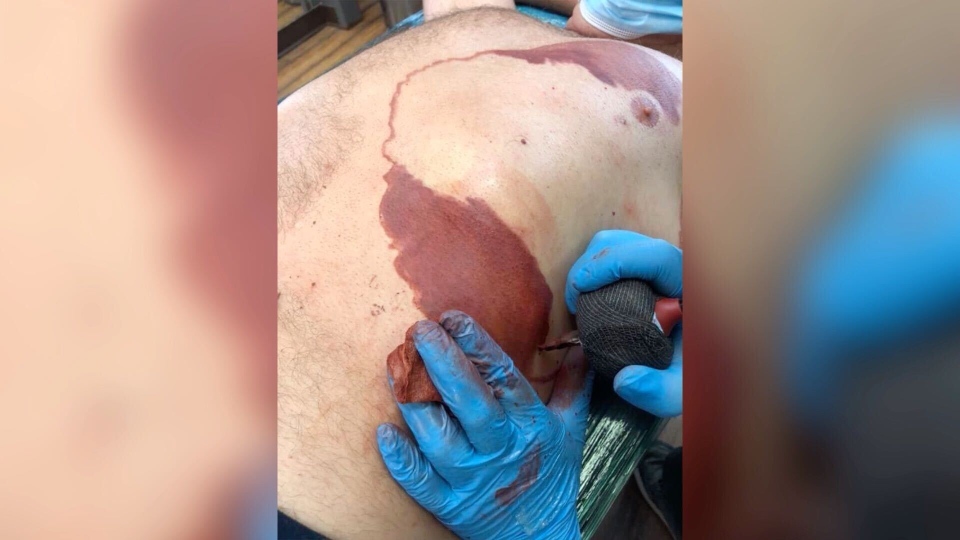 A tattoo the size of Prue Sr.'s would normally cost thousands of dollars, but the owner of Juicy Quill Tattoo took a liking to the father's story and did the work mostly free of charge.

"I originally thought it was going to be a one time shot. After about four hours I asked if it was done," the dad said. "They said, 'Just the outline's done.'"

Prue Sr. revealed his new body art to Prue Jr. at a local swimming pool which led to some questions from the boy.

"He was asking me you know, how long was I going to have it," said Prue Sr. "I think it took awhile to process."

"It's cool and I like it," Prue Jr. told CTV News Edmonton. "It's because I was scared that people were gonna make fun of it."

Prue Sr. says the ink work is almost done. He'll just need an eleventh session to touch up the shading.

"My own dad, his papa-guy, passed away here a couple weeks ago so he had a chance to see it while it was getting put on," said Prue Sr. "He sacrificed a lot for his kids too, so I feel in retrospect now that it was a good way to honour him as well."