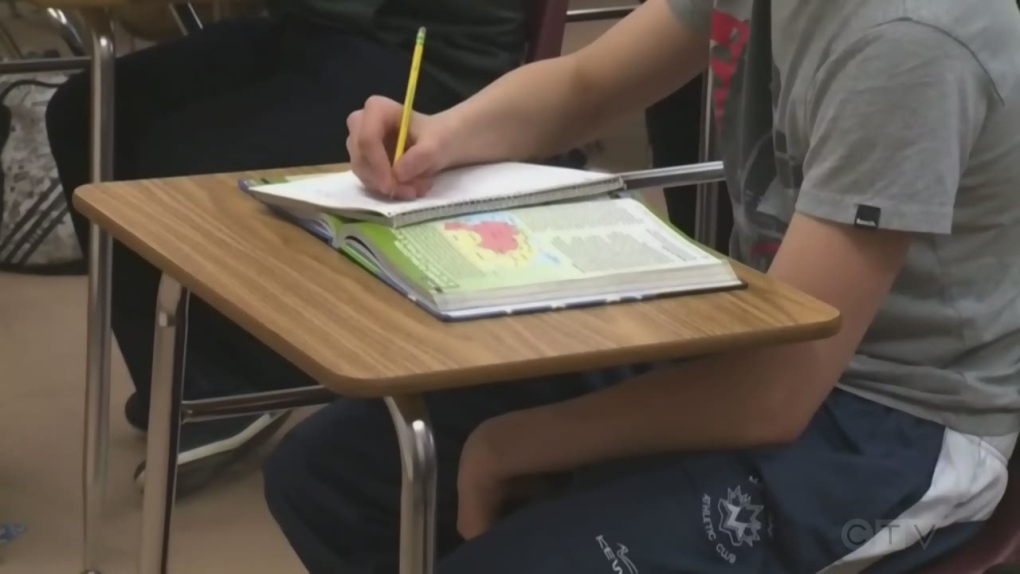 The chair of Alberta's fastest-growing school board says the latest budget unveiled by the province offers an "unprecedented" amount of financial support to charter schools.

Alberta allocated $700 million over three years to send to school divisions, representing an increase of around 1.7 per cent. At least $70 million will pay for expanding and operating charter schools.

"Unfortunately, we are seeing an unprecedented investment in charter schools in this province and that creates a slow erosion, in my mind, for funding for public education," Estabrooks said.

"Public schools, we are here to serve everyone. Charters and privates are not. And so the bottom line for us is that public dollars belong in public education."

"The slight thaw we are seeing in the education budget," Estabrooks added, "that also will buoy charters and privates as well."

She disagreed with Estabrooks' comments that charter schools do not cater to all.

"That's just misinformed," Paradis said. "Anyone can sign up for a charter school."

In Alberta, charter schools cannot charge tuition and are mandated to be inclusive.

"Our issue is not on who we want to accept, it's that we just don't have room," she added. "If we are allowed to grow, we will have more room."

There are 15 charter schools in the province and Premier Jason Kenney says the waitlist is around 15,000 students long.

"I don't think there is any advantage with having just one system of schools," Paradis said. "I think you create some really positive competition when there is more than one system."

For her, that competition is for students and public dollars.

At an unrelated press conference on Friday, the premier said it was time to give Alberta charter schools "equal footing."

"Albertans believe and benefit from school choice," Kenney said. "We believe parents, not politicians, know what's in the best interest of their kids and we believe in choice and diversity in education. Charter schools are a fantastic example of that."

"We have parents and families who are deeply involved in their kids' education who set up these schools with specialized programming," he added.

In his view, charter schools have not been given the right tools to succeed like other public and separate school boards.

Kenney said it is time they also receive capital investments and maintenance funds for infrastructure, just like other school boards receive so that there isn't a "cookie-cutter approach" to public education.

"Public charter schools are part of the public system," Kenney said. "They are not privately funded and there is more demand than there is supply.

"Charter schools are part of our diverse offering of educational programs," he added. "They've done extremely well in Alberta in terms of their educational outcomes. They're very popular with parents."

One political scientist told CTV News Edmonton that the province's decision to increase charter school funding could have more to do with the United Conservative Party's search for political support.

"Among them will be many rural Albertans and the charter or home school option in many cases will really resonate in those communities," said Lori Williams, Mount Royal University political scientist.

"I think broadly speaking there is an openness to a choice in terms of schooling, but not at the expense of public funding of education," Williams added.

"I don't think any Albertan is interested in seeing a system in where people who are privileged or wealthy or happen to be geographically advantaged have access to choices in schools and quality in education that undermines the access to quality education for all Albertans."

FBI Director Chris Wray is raising national security concerns about TikTok, warning Friday that control of the popular video sharing app is in the hands of a Chinese government "that doesn't share our values."

Myanmar's military-installed government has sentenced more critics to death, bringing the total to 139, and is using capital punishment as a tool to crush opposition, the UN high commissioner for human rights said Friday.

Prince William capped a three-day visit to Boston by meeting with President Joe Biden to share his vision for safeguarding the environment before attending a gala event Friday evening where he sounded an optimistic tone about solving the world's environmental problems through "hope, optimism and urgency."

Pentagon debuts its new stealth bomber, the B-21 Raider

America's newest nuclear stealth bomber made its debut Friday after years of secret development and as part of the Pentagon's answer to rising concerns over a future conflict with China.